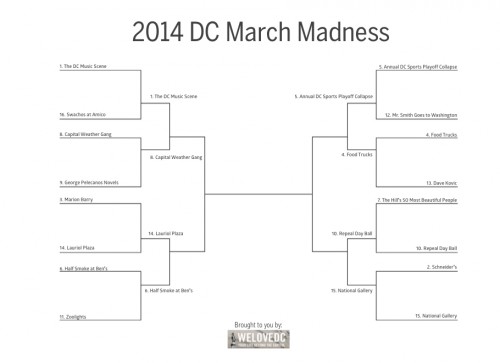 So some MAJOR upsets in the Sweet Sixteen with some top seeds taking a beating. DC’s “Mayor For Life” was upstaged by Mexican food hangout Lauriol Plaza. Schneider’s took a shellacking from the usually refined and reserved National Gallery of Art. The Hill’s Top 50 and Repeal Day took things down to the final seconds with booze ultimately winning out. Zoolights just did not show up and Ben’s Half Smoke rolled on over them. Our #1 seed – The DC Music Scene – looks strong with Food Trucks and the Annual DC Sports Playoff Collapse still in major play for the Final Four. There are no easy matchups for the Elite Eight, so choose wisely and get your vote in by March 31st.

#14 Lauriol Plaza: There is better Mexican food and there are better margaritas, but playing hooky from work to go sit on the Lauriol Plaza patio and people watch is a NW DC tradition. When I first moved here in the 90′s my roommate – who grew up in Texas – made sure we went for margaritas and enchiladas on a nice day, while being apologetic that it wasn’t quite the standard to which I was accustomed. New entrants Masa 14, El Chucho, and El Ray may yet unseat it as the pinnacle of outdoor margaritas, but Lauriol Plaza’s longevity means it can never be counted out.

#5 Annual DC Sports Playoff Collapse: An annual classic, the [insert DC sports team name here] playoff collapse is something to be expected these days. No matter the sport, DC teams have turned the playoffs into a perennial exercise in fan keep-away. Will they or won’t they? Can the Caps cobble together a solid defense and take the Stanley Cup? Can the Nats string together consistent play to rise to the World Series? Is it possible the Washington pro football team can brush off the curse of its moniker and find its way back to the Lombardi Trophy? What the hell’s up with DC United, anyway? Someone mentioned the Wizards are on a roll; just wait, they’ll implode at the height of their playoff success, too. It’s inevitable around here. DC pro sports and fan disappointment go hand-in-hand like Metro and escalator breakdowns; we’re used to our bitter tears to the point it’s become a forgone conclusion every single year.

#10 Repeal Day Ball: While true credit for the idea goes to Portland’s Jeffrey Morgenthaler, the DC Craft Bartender’s Guild’s annual Repeal Day Ball was the first big party to run with the idea of celebrating the country’s native drinking holiday. DC’s best and brightest bartenders dress up in their finest formal wear and throw a revel to equal the last parties thrown before Prohibition became ill-advised law.