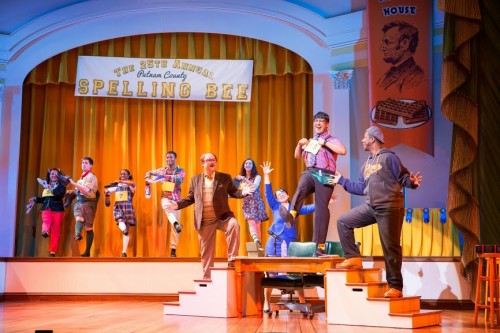 Although Broadway musicals throughout history have been written about a tireless myriad of topics and events, few plot lines seem weaker or less full of suspense at the onset than The 25th Annual Putnam County Spelling Bee. With the entire storyline centering on the events at a Midwest American spelling bee, the only initial enthusiasm for the show seems to be in wondering who the winner will be. Yet despite the fact that the entire plot really is exactly what it seems to be—contestants competing in a small-town spelling bee—The 25th Annual Putnam County Spelling Bee is a work of musical genius and one of the most amusing and entertaining shows I have ever seen.

The cleverness of the show lies in its complex simplicity. The plot is simple, with the audience knowing that as the show progresses, each of the contestants will be eliminated from the competition until there is only one winner. But book writer Rachel Sheinkin and composer/lyricist William Finn have added a wonderful layer of complexity to the show by leaving the audience asking more than just “who will win,” but also “what will cause the others to lose”, “how did the contestants come to be at the spelling bee in the first place”, and “how will this one event shape the remainder of the contestants lives (if at all)”. To be answered through short musical vignettes woven in between the actual bits of competition, and to all be done in a way that is uproariously hysterical is sheer brilliance.

Because of its simplicity, The 25th Annual Putnam County Spelling Bee is a show that is easy to do well, even for the most amateur of theaters, and the current professional production at Ford’s Theatre does not disappoint. Director Peter Flynn has assembled a talented cast and production team that includes musical director Christopher Youstra and choreographer Michael Bobbitt. Together, they have assembled a show that is rare for Ford’s Theatre in that it’s not just very well done, but it’s also really approachable for audiences. This didn’t feel like an audience watching a musical, it felt like an audience watching an actual spelling bee, which was perhaps helped by the fact that four members of the audience are actually brought onstage as competitors in the spelling bee (and scripted to be eliminated at certain points in the script by being given impossible spelling words). Still, most of the actors were able to create characters that were relatable and identifiable, which is made challenging by the fact that these are adult actors playing children.

Particularly impressive were Carolyn Agan (as Olive Ostrovsky), Vishal Vaidya (William Barfee), and Felicia Curry (Marcy Park) whose childlike innocence was achieved without becoming too childish. Grounding their performance in finding the awkwardness that is adolescence instead of playing to familiar character stereotypes was notable. Also of note was Rachel Zampelli as spelling bee host Rona Lisa Perretti whose deadpan witty, side-splitting ad-libbed interactions with and about the audience contestants were delightful.

The most surprising standout of all, though, was Matthew A. Anderson as Vice Principal Douglas Panch. Often a forgettable character who reads word definitions to the spellers, Anderson was able to turn a nondescript, lecherous also-ran into a sympathetic, likeable and memorable underdog.

The only real disappointment with the production is the fact that the best song in the show (and one of the best songs in contemporary musical theatre anthology), was edited, no doubt to appeal to the droves of middle-school groups who descend on Washington DC each spring for their class trip and were present in the audience on press night. When contestant Chip Tolentino (played by William Kempski) spots a pretty girl in the audience, his subsequent erection causes him to make a spelling mistake and he is eliminated. In Ford’s production, the musical number that follows, Chip’s Lament, also called My Unfortunate Erection, was altered to be ‘My Unfortunate Distraction’ with all references to the offending protuberance minimized and made family friendly. Although audience members unfamiliar with the original song had no idea what they were missing out on, those of us who know the show and were expecting the version we love were disappointed. Indeed, it was a disservice to Kempski whose star moment in the show was diminished by lyrics that fail to reveal the true nature of his shame. Understandably, the lyrics had to be changed to appeal to the hordes of groups who will attend the show, but it was, nevertheless, unsatisfactory to have such an ingenious song dulled down.

Still, The 25th Annual Putnam County Spelling Bee is a production worth seeing and much funnier, clever, wittier, engaging, and entertaining than a musical about a spelling bee would be expected to be. The characters are loveable, the audience contestants are hysterical (without meaning to be, making them all the more hysterical), and the music is fun (the edited Chip’s Lament excluded). Scripps National Spelling Bee has nothing on Putnam County. I’d rather be in Putnam County any day.