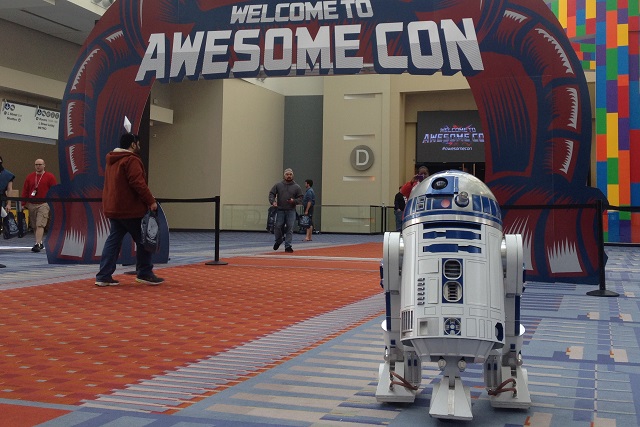 A major science-fiction and comic book convention came to the Washington Convention Center over the weekend in the form of Awesome Con, which boasted about 40,000 attendees, according to reports.

The second-ever Awesome Con grew quickly with the help of a Kickstarter campaign and thus offered enough, perhaps barely enough, spectacle and content to fill an exhibit hall and related rooms dedicated to panel discussions during its three-day run from Friday, April 18, through Sunday, April 20.

And so here are in our opinion five things that helped make Awesome Con pretty awesome.

If there were an award for “Most Clever Exhibitor,” my nomination would be for the R2-D2 Builders Club, which bought two fully active, remote controlled R2 units to the convention. These droids looked and acted like the movie version of the real thing as they zipped along the convention entrance and the showfloor. They made beeps and bloops, played themes from the Star Wars movies and even played the full text of Princess Leia’s plea for help to Obi-Wan Kenobi. You could get your picture taken with an R2-D2 free of charge, so I’m not certain what the R2-D2 Builders Club got out of exhibiting, but may the Force be with them.

The organizers of Awesome Con attempted to break the record in the Guinness Book of World Records for the largest gathering of people dressed in superhero costumes. The gathering, held on Friday, fell well short of beating the record number of 1,530 gathered in China in 2011. But on the plus side, many of the costumed folks came to the convention center to show off their colors, and quite a few of them were well done indeed. Many pairs of Thor and Loki stroked the convention floor aisles, as did other notables such as the Black Panther, Quicksilver and the Scarlet Witch, the Black Cat, Green Arrow and Black Canary. 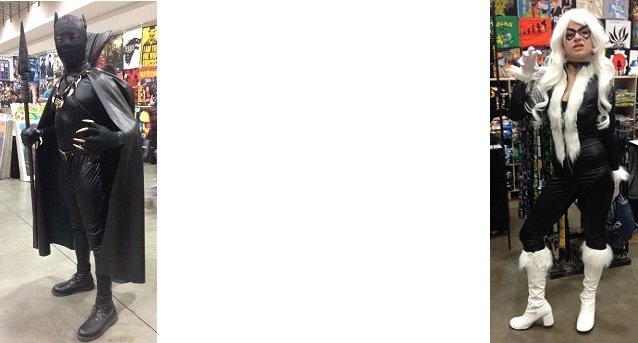 Awesome Con boasted a number of special media guests, many of whom held Q&A panels. The big draw this year was Billie Piper, known particularly for two seasons of the rebooted Doctor Who television show. She drew significantly large crowds, and you could even purchase a VIP package centered on an autograph and photo op with her. (It sold out.) Kevin Sorbo, who played Hercules on a popular television show, was in attendance, as was the original blue and black Power Rangers, and a host of others. Bona-fide movie-star Cary Elwes was apparently there, but he was secluded behind a private curtain insofar as I could see, so I’ll take the convention’s word for it. For my money, it was worth going to a charmingly humorous Q&A with Dirk Benedict, who of course portrayed Starbuck in the 1970s’ Battlestar Galactica and Face in the A-Team. 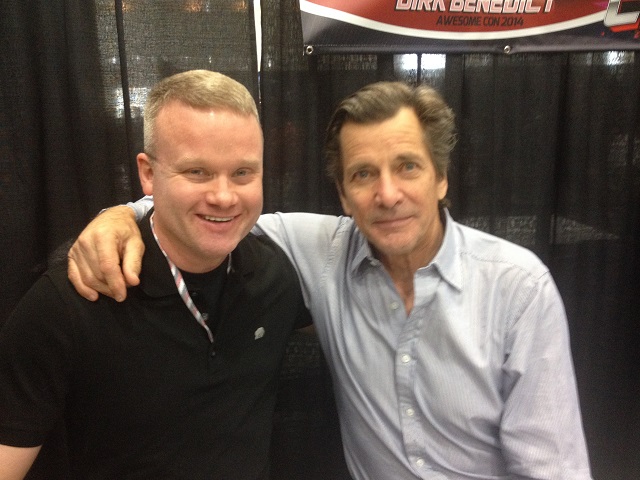 The author and Dirk Benedict

The Awesome Con Artists Alley took up the middle half of the convention floor and featured some names of note, particularly George Perez, Marc Hempel, John K. Snyder III, and others. Perez hosted a panel discussion about his work. Artists were selling books or prints or sketches. Many independent artists demonstrated a focus on subjects other than super-heroes, sometimes making the alley reminiscent of Small Press Expo, which will be held at the Bethesda North Marriott Hotel & Conference Center in Bethesda, Md., on Sept. 13-14.

By all accounts, Awesome Con exceeded its monetary goals and promises to return to the Washington Convention Center next year. Live long and prosper, Awesome Con.