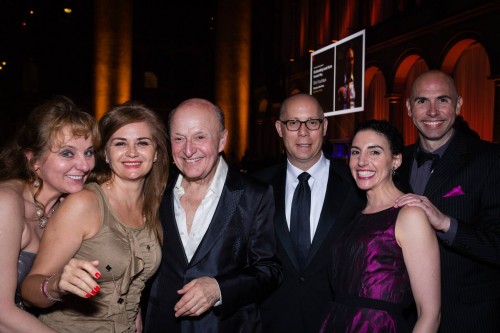 Helen didn’t come during a particularly quiet time in my life. Fresh off a week-long business trip in NYC and a weekend packed with whiskey bars and wine tastings left me reeling. However this 5-day bender was close to finished, all I needed to do is to survive Drama Prom. I was going to need a nap.

Meanwhile actor John Dellaporta was already pre-gaming and many praise their Rent The Runway outfits. If you were Chris Klimek however, you were ready to cut the person that copies his approach to “Creative Black Tie”.

We have begun!! #HHA30 pic.twitter.com/0m1LTudmLs

The theatreWashington crew was ready to turn on the lights, while this group of partiers were ready to black out:

This, mind you, is the BEGINNING of the night. #HHA30 pic.twitter.com/K6piLcbTHD

My bow-tie outfits often get lots of respect but I will admit when you attend the Helen Hayes Awards, it’s more of a status quo.

Also lots of people took selfies of them getting to the show.

With wristband secured and Five Hour Energy shot taken it was time to see what Helen had in store for the night:

Well, that explains it. Only at a theater bash. #HHA30 pic.twitter.com/FQjiyWBhia

BREAKING: THERE IS A MAC AND CHEESE BAR #hha30

He made a beeline to all the right things #popcorn #whiskey #HHA30 pic.twitter.com/lZH1j6qRlt

Line at the bar is getting crazy, people need a drink before showtime! #HHA30

My inner stage manger loved hearing the show warnings in the style of a stage manager running through cues.

The show opens with a musical number from Sam Ludwig, Rachel Zampelli and Ashleigh King but I’ll be honest- it was hard to hear from the back. However it looks like they sang about the party being five hours long and much more streamlined:

Noticeable difference at #HHA30: the open layout means patrons are half paying attention to the action center stage.

As Linda Levy makes opening remarks, the general scene of the night sets in. In past years the crowd had to endure a three-hour long awards show which drove many to the flasks. Instead the emphasis was put more on the party and less on the awards. As a result the overall scene was split between those paying attention and those freely socializing. I’m a fan of the move yet I can imagine some who might not appreciate having their acceptance speeches fall on deaf, drunk ears.

Also if acceptance speeches ran over winners got played off by the band along with the three performers who sang, “Goodbye!” while waiving. It’s a very entertaining sight.

The journo crew of me, Ben, and Maura spend a long time waiting in line for a drink. The bar lines are a common complaint of a night that had few other things to complain about. The whole ordeal is reminiscent of an Inaugural Ball. I saw one actress hold up the line as she ordered nine glasses champaign. I hope they were not all for her.

I also realize that a show of three acts and two intermissions effectively makes the Helen Hayes Awards into a hockey game.

While we were waiting in line actress Kimberly Gilbert demands that we all bow down to her family and a steamy promo plays for theatreWashington’s Summer Hummer event. I casually explained to those unaware that it’s the event where, “I think people sing but they are naked or something.”

The Murder She Wrote star makes a cameo during Victor’s Helen Hayes tribute. Meanwhile I start taking photos with people for the next hour:

1 year ago I met this handsome gentleman at the HHA. Happy reunion! #hha30 pic.twitter.com/QUaS2tfuPM

The open bars are closing and people’s feet are getting tired. The ladies go running for the shoe check and put on a pair of Helen Hayes slippers.

Aubri gets desperate for a drink while Gwen’s photos get more and more blurry (much like my memory at that point).

Should have taken some photos tonight.

Perhaps Ben, but then again maybe it was for the best. My date and I eventually make an early exit while the rest of the party rages on:

I may never hear properly again. It was worth it. #HHA30 #DCTheatre #dramaprom