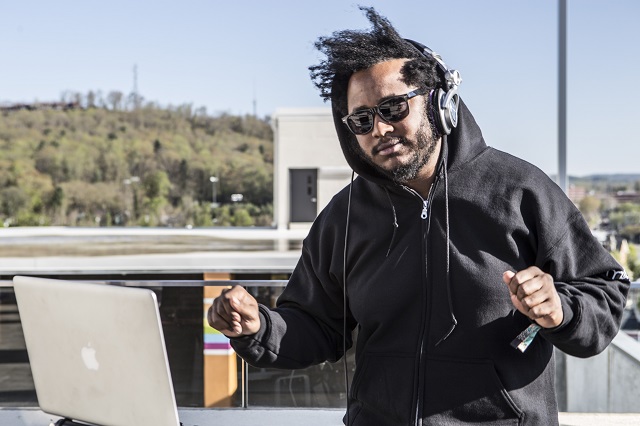 I’ve always said that, compared to New York, D.C. is a small, sleepy Southern city. It was interesting then last week to somewhat put my money where my mouth is, and go to Asheville, N.C., a truly small Southern city, to attend Moogfest, the annual festival dedicated to the sounds of the synthesizer, and Moog devices in particular.

For five days, the city of Asheville is anything but sleepy, however, as visitors and residents alike rise at 9 a.m. for lectures, insights, demonstrations, presentations and performances, only to stay out until 2 a.m. every night, dancing their hearts out to the likes of Flying Lotus and Dan Deacon.

For my part, I arrived on Wednesday, April 23, the first day, and journeyed to city center, the location of the Aloft Hotel, a Moogfest sponsor. The hotel hosted the Moogfest Urban Art Installation Activation, a gallery featuring 10 large-scale installations designed to enhance the experience of an audience by engaging multimedia and multi-sensory experiences of sound, structure, light and form.

I headed to the roof for an opening party DJ’ed by Thundercat, a recording artist on Brainfeeder who played at our own U Street Music Hall as recently as last Nov. 26.

Thundercat was a crowd-pleasing performer, who kept several hundred people on the open rooftop grooving to the likes of “I’d Rather Be With You” by Bootsy Collins and “Mercy Mercy Me” by Marvin Gaye until switching it up in favor of “Under Pressure” by Queen and David Bowie and, of course, “West End Girls” by the Pet Shop Boys.

Festival organizers were pleased to represent local wares of greater Asheville, which long had been the home of Dr. Bob Moog, inventor of the Moog synthesizer and still home to Moog Music Inc. Local beer, for example, was easily found everywhere, and the festival’s beer of choice seemed to be the Pisgah Pale Ale from Pisgah Brewing of nearby Black Mountain, N.C. 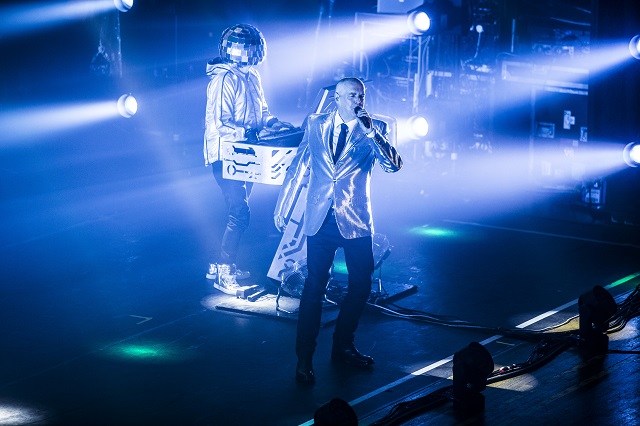 It was easy to spend some time on the rooftop with the tunes, the beer and ribs and pulled pork before sliding off to actually see the Pet Shop Boys, headlining the opening concert up the road at the Thomas Wolfe Auditorium, located within the large complex of the U.S. Cellular Center. The Thomas Wolfe Auditorium resembles a more intimate version of D.C.’s DAR Constitution Hall–whereas Constitution Hall holds about 3,700, however, Thomas Wolfe tops out around 2,400. It also has better sightlines and acoustics, IMO, but perhaps that’s just me.

The Pet Shop Boys performed the Electric tour, much as they did at the Strathmore Music Center on Sept. 19, 2013. That show was the best I’ve seen from the Pet Shop Boys, and this performance did not disappoint either. At Thomas Wolfe, the audience were free to roam about the seats, aisle and pit, so it was easily possible to end up near the front with excellent views of the light shows and dancers dressed as satyrs incorporated into the Electric show.

Neil Tennant and Chris Lowe opened with the video of “Axis,” which also opens their latest album before moving into familiarly snarky territory with a medley of “One More Chance”/”Face Like That”

What followed was nearly a perfect setlist from the Pet Shop Boys, including the likes of “I Wouldn’t Normally Do This Kind of Thing,” “Suburbia” and the excellent “I’m Not Scared,” originally written for Patsy Kensit and her band Eighth Wonder before Tennant and Lowe reclaimed it as their own. Their ubiquitous powerhouse rap “West End Girls” came soon after, as did “Thursday,” an ode to a long weekend and one of the strongest songs from their latest album. I was floored by the rare “I Get Excited (You Get Excited Too)” and exhilarated by the closing string of “It’s a Sin,” “Domino Dancing” and “Always on My Mind.”

You could not have asked for a better show to open Moogfest, and the Pet Shop Boys were pleased to deliver. 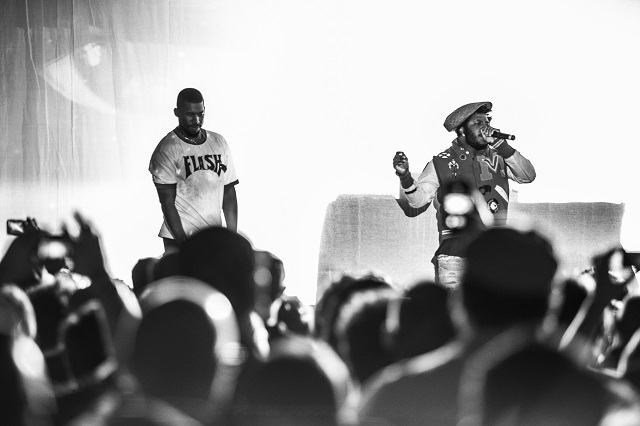 After the outstanding show by the top UK synth duo, I was very keen to make my first visit to the Orange Peel, essentially Asheville’s answer to D.C.’s 9:30 Club. And it’s a worthy answer to our storied institution. Some of us may recall that Billy Corgan selected the Orange Peel for a nine-day residency of his new Smashing Pumpkins June 23-July 5, 2007, and there’s little doubt that Chicago’s metal maestro chose well. The 1,000-person capacity club felt a lot like seeing a 9:30 Club show, sans balcony, as I turned up for Flying Lotus, the Los Angeles-based DJ and producer (who actually hit the 9:30 Club about a year ago with Thundercat).

Mr. Lotus was a chatty performer, working the crowd as he spun the likes of “Kan” by Kode9, his own “Physics for Everyone!” and “Pass That Shit” by DJ Rashad, who unfortunately passed away only a few days later to the surprise of many before a scheduled show in Detroit.

Once one tired of the very heavy crowd that turned out for Flying Lotus, one could escape the IDM to the private cocktail lounge in the basement of the Orange Peel, known as Pulp, find a seat and watch the rest of his performance on a big screen in the sanctity of a comfy chair with a glass of bourbon in your hand (and even potentially recharge your phone in an available outlet).

And so that was pretty much my first day at Moogfest. Come back tomorrow for an account of my second day, where I basically am reminded of why I love prog rock so much by an old master and then discover Asheville’s equivalent of the Black Cat before falling in love with Yacht.