There are few things more satisfying than beating the Phillies. Doing it to move back over .500 and complete a sweep, though, that has to count for something. The Nationals’ offense came alive in the series against Philadelphia, as the Nationals pounded their neighbor to the north to the tune of 19-6 across three games. The Thursday afternoon match-up was no different than the rest of the series, as the Nationals gave up a run early, fought back to even, then went ahead for good in the fifth on the bat of Adam LaRoche.

The Nationals’ second sweep of the season featured some stellar performances from their starters, who combined for 20 strikeouts in 3 games, and surrendered just a single walk, across 22 innings. Doug Fister’s fifth start for the Nationals was fairly stellar as he went seven full innings, giving up two runs on four hits, striking out five and walking none. Where he really shone, though, was in the defensive efforts. At one point early in the afternoon, Fister reminded everyone that he used to play first base, and found himself in ballet splits to attempt the completion of a double play. 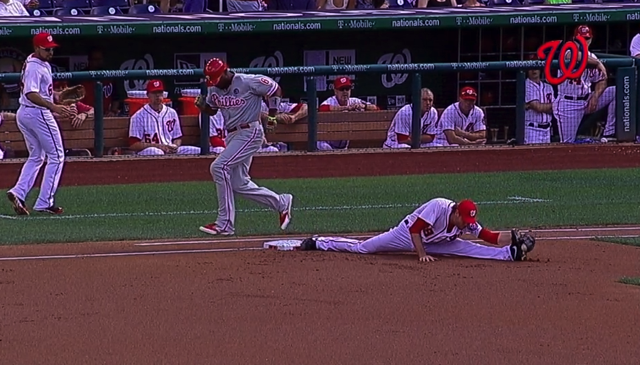 Tyler Clippard and Rafael Soriano pitched two perfect innings in relief to pick up a hold and a save respectively, and the Nationals moved to within a game of the lead in the oddly weak National League East. With Atlanta off for travel, the Nationals are in third place behind the Marlins and Braves, both tied for the division lead at the moment.

After the game, Manager Matt Williams was quick to point out that they have a hard road trip ahead of them, with three games in San Diego (27-33), four in San Francisco (38-21), and three in St. Louis (31-29). Williams said that while this was a great series, there are some serious opponents waiting on the road. Asked if this was a test of the club, Williams was cagey, suggesting that while it may be a test, it wouldn’t be a deciding factor in the season as a whole.

In addition to the great starting pitching against Philadelphia, the Nationals benefited from leadoff hitter Denard Span’s excellent series, where he went 6-14, with five runs scored, and Ryan Zimmerman’s return, going 4-9 with 2 RBI. The Nationals’ offense has struggled at times due to injury, and the return of LaRoche and Zimmerman over the past series have put the Nationals on a 5-1 tear, with a +26 run differential against Texas and Philadelphia.

The Nationals will return to DC to face Houston and Atlanta starting June 17th.