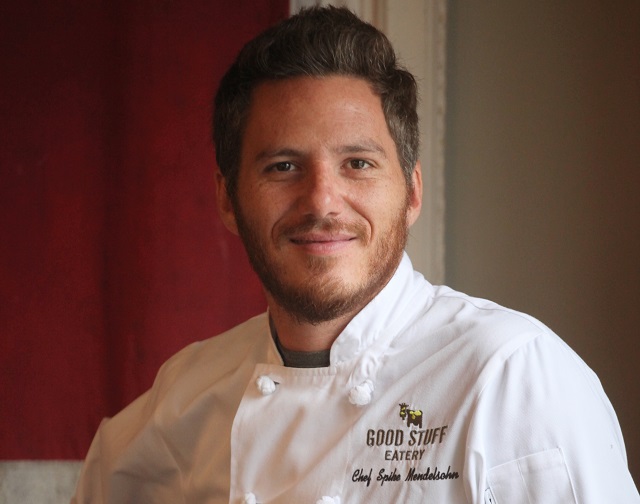 Mendelsohn and Johnson really hit it off, and the musician invited the chef to create a sustainable picnic for a concert to benefit the Johnson Ohana Charitable Foundation at Merriweather Post-Pavilion.

“He and his wife have this amazing organization, so Kim Johnson reached out to me to see if I wanted to do a sustainable picnic at their concert,” Mendelsohn said. “I got to see them [last month] at Merriweather, and it was one of the best times of my life.”

Mendelsohn’s enthusiasm for Johnson’s music and music in general comes as no surprise to his friends. He’s been supporting the DC music scene since he first arrived for a visit to his parents about 10 years ago. Then, he was staying near Whitlow’s on Wilson, where reggae band SOJA once had a residency. Johnson started attending, and he was hooked. He recently caught SOJA again (also at Merriweather-Post) and as an added bonus got to watch a performance by favorites J Roddy Walston & the Business as well.

You’ll very often catch Mendelsohn at the Eighteenth Street Lounge on Wednesdays, enjoying See-I, another reggae act. So perhaps it is no surprise that his latest venture, speakeasy The Sheppard, is located down the street from the lounge on the southside of DuPont Circle.

“In the busy days and stressful life called the restaurant subculture, it’s nice to blow off some steam and listen to some cool music,” Mendelsohn said.

We, The Pizza and Good Stuff Eatery TheGirlsNY

The Sheppard is a bit different than other Mendelsohn ventures. He opened Good Stuff Eatery on Capitol Hill with his parents, expanded to a pizza joint and a French bistro, and now a cocktail lounge with specialized bar snacks.

The chef opened The Sheppard with one of his best friends, Vinoda Basnayake, lobbyist and proprietor of Kabin (located next door to The Sheppard), and mixologist Jack Caminos, a.k.a. Jack Stache.

“He’s worked with some of the best bars and speakeasies in the country,” Mendelsohn said of Jack Stache. “This is his first solo endeavor and he’s killing it.”

As for the food, visitors will find Sriracha deviled eggs, a cheese plate and some pata negra, served with sherry foam and some caviar. (Mendelsohn credited Jose Andres with providing him with the source for the pata negra ham to make that dish possible.)

Having fun while working and treating coworkers like extended family are two lessons that Mendelsohn took away from his career, which reads something like a storybook fairytale.

“My mother said if you want to make something of yourself and be an amazing chef, you should go to France and work specifically for this guy, Gerard Boyer, in this castle, and you’ll become one of the greatest chefs,” Mendelsohn recalled.

His mother said that when Mendelsohn was 13 years old, and sure enough, eight years later, he did exactly what she told him and worked for Boyer in France for two years. He soaked up as much French culture as possible and developed an equally high regard for food.

He quickly determined this was the life for him—to work for the likes of Thomas Keller at the French Laundry and Sirio Maccioni at Le Cirque. He then became infamous for his turn on Bravo’s Top Chef.

“All it took was one reality show on Bravo to ruin all of those dreams,” Mendelsohn joked. “That set me off on another course, which is amazing, so no complaints.”

He answered the call of his parents to open the first Good Stuff Eatery with them on Pennsylvania Avenue.

Space became available next door, and Mendelsohn snapped it up to open We, The Pizza. That, too, went really well.

“And before you know it, I’m known as the ‘pizza and burger guy’ for five years, and my ego is kind of hurt!” Mendelsohn quipped. “I can’t take it if some other person tells me, you’re the burger dude. Although I love it and I embrace it, I have trouble swallowing it all the time.”

And so when another space on the same block became available, Mendelsohn leapt at his chance to open a French restaurant. Béarnaise originally was to be modeled after Le Relais de l’Entrecote in Paris. But circumstances conspired against him in the form of a really talented chef, Brad Race, who shared Mendelsohn’s love of all forms of French bistro food.

“A steak frites is a steak frites. It’s more high on concept than it is on special ingredients. You definitely have all five of the classic mother sauces,” Mendelsohn said. “But then we got bored after the first couple of months. Before you know it, we came out with this special and that special.”

The kitchen ended up stocking 15 items or more that weren’t even on the menu! Race’s ambitions grew, and he and Mendelsohn converted the steak frites specialty concept into a full-blown French bistro.

“So you’ll see a lot of classic dishes like pig’s feet. We have crispy pig’s feet with a mustard leek kraut with bacon. We are making French onion soup; we are making pâtés; we are making rillettes. We are making all of that good food that I grew up eating and loving and that revolutionized my career when I was younger,” Mendelsohn said.

And so almost by accident, the chef opened up a French restaurant the likes of which he always sought to open. And with The Sheppard, the culinary adventures continue.

“The company is growing. The cool part about it is that it’s my family and my friends. I’ve got the biggest support scene you could possibly ask for. I’m not in business with strangers,” Mendelsohn said.