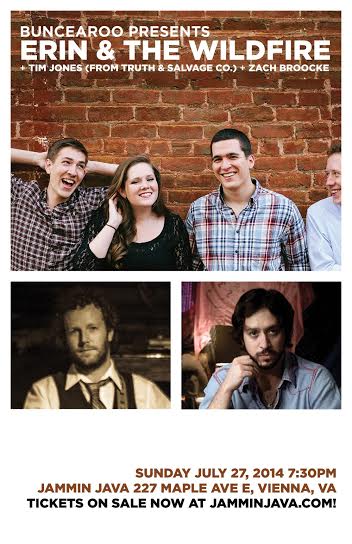 The soul rock vibe runs deep with this band. Where do the songs come from, who writes them (is it a collaborative effort), and what musicians past or present influence what you write?

Erin typically conceives the first ideas to most of the songs, whether it be words, basic chords, or a melody. Once she has developed that seed enough, she’ll present it to the group and we collaboratively construct the final product by fleshing out details and hammering out the overall arrangement. Influences include Eva Cassidy, Grace Potter, Steve Gadd, Jimmy Page, and Paul McCartney.

After seeing the band perform live a few times and listening to your interview on The Circus Life podcast, I’ve got to say that this is quite a band of characters. What’s one of your favorite stand-out funny memories from a show (or even a rehearsal) while all together?

Erin: The bar gig where this drunk person snatched the mic off the stand (mid-song) and started belting out Johnny Cash.

Ryan: The time I mega-sneezed on Nick’s ride cymbal and he got really grossed out. This was also in the middle of the song and there was copious precipitation.

Nick: The fact that after 2 years together, I am still the reigning and undefeated billiards champion of the band.

Matt: During a show at Devil’s Backbone Brewery, I was grooving on stage and went to bust moves over by Nick’s kit. My cable got tangled around my legs and I nearly Shia LeBeefed into the drums.

You were recently signed to Red Dust Music. How does that feel and what’s on the horizon for you now that Red Dust is in the picture?

Red Dust kicks a lot off ass and we are stoked to be working with Heather!!! We’ve got shows on shows coming up and recording soon too which is awesome!

You’ll be headlining Jammin’ Java as part of Buncearoo Presents show on Sunday. How did you get involved with Buncearoo and drew you toward working with them?

Buncearoo is awesome, first of all. What’s up Cheryl and Bill! They came to see us at our first Iota show back in March and they’ve been in touch ever since! They really care about the music they are supporting. Ideal music people to work with!

Erin and The Wildfire will be at Jammin’ Java Sunday night, July 27 with Tim Jones and Zach Broocke as part of a Buncearoo Presents. Tickets are still available.