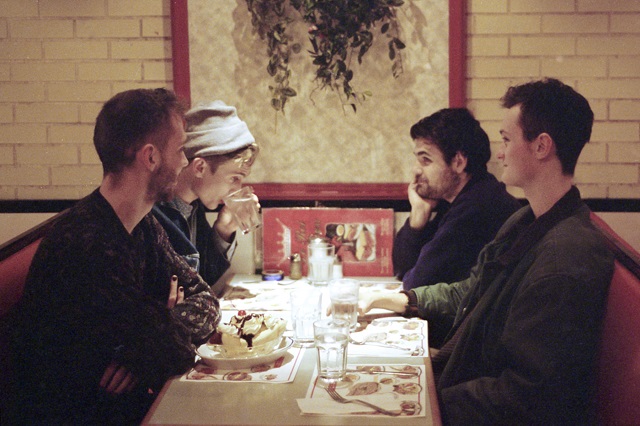 Tim Beeler is on your stage, and he has something he wants to say to you.

Guitar in hand, sometimes he sings it to you, but just as often it seems, he speaks over the snappy art punk beats of his band, Ought.

And Beeler wants to talk about being in the moment, being in love, putting things together — but all in a perspective from “every man.” In that way perhaps, the lanky vocalist is extremely reminiscent of David Byrne or Lou Reed in his delivery.

Thursday night at DC9, Ought opened with “Today More Than Any Other Day,” an amazing tribute really to living one’s life. It’s a bit like lyrics by Byrne superimposed over melodies that could have come from Television. Musically, Ought could have sprung straight from 1977 via New York City.

Take a look at these lyrics from “Today”:

Today more than any other day, I’m excited to listen to this band!

The rest of the band consists of keyboardist Matt May, drummer Tim Keen and bassist Ben Stidworthy. The quartet live in Montreal, where they met in college, but they are all ex-pats. Three of them hail from the United States while drummer Keen is Australian.

Keyboards are used as backing emphasis to a jangly guitar and a punk rock rhythm section. The melodies are spare and infectious.

The band’s debut LP, titled More Than Any Other Day, consists of eight songs that run on average about six minutes long. They just about performed all of them last night. At times, the material really verges very closely to that of one of my all-time favorite bands, the Talking Heads, perhaps nowhere more so on the very good song “Habit.”

And he cleverly addresses the feeling of falling in love as “a habit forming” and sings in such a Byrnesque manner during the chorus “And there it comes again! And I give in again!”–being sharp yet vague and resonant yet punchy all at the same time.

Now don’t get me wrong. As much as I like to run away with these comparisons to my musical heroes, Ought are no pastiche. The four young gents have their own personality, their own rhythmic cohesion. Beeler seems very comfortable in his own skin, providing the aura of a congenial tour guide/academic. Overall the band members have a strong focus and a good rapport amongst themselves and their audience.

They only have two more U.S. shows on this leg of their tour—in Princeton, NJ on Saturday and SUNY Purchase on Sunday—before dashing off to Europe. They’ll surely be back soon, likely to play to an even bigger audience.