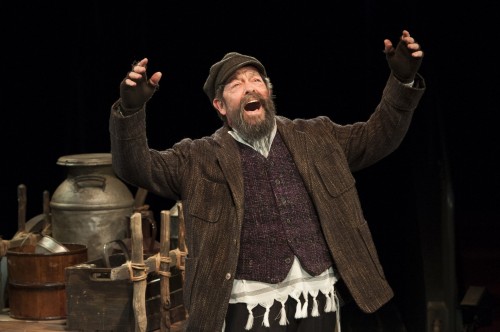 Jonathan Hadary as Tevye in Fiddler on the Roof at Arena Stage at the Mead Center for American Theater October 31, 2014-January 4, 2015. Photo by Margot Schulman.

And yet, the very same thing that makes a decent production so easy to do, is also the reason why producing a truly incredible production of Fiddler on the Roof is so challenging. Directors, designers, and theatre artists wanting to not simply recreate the same production of Fiddler on the Roof that has been seen on the tens of thousands of stages over the past 50 years is extremely hard. This is a show where keeping the integrity of the material is the foremost priority, so trying to find ways of making this iconic musical-theatre staple feel original and unique requires a team of visionaries who understand that sometimes the way to do this is to not try to do something original and unique. Whether or not this was deliberate on the part of director Molly Smith and her creative team at Arena Stage, the final result was that what could have been merely a decent production ended up being truly incredible.

What I appreciated about this production is that Smith and her team kept the visual and directing aspects simple, basic, and consistent with what one would expect to see with any production of Fiddler on the Roof. The show is so well written that it doesn’t require embellishment and they recognized that, remaining true to the text and the original conceptual intent of the piece. There were a few bits of visual charm throughout the show, including the clever use of hydraulics in The Dream and Parker Esse’s incredible choreography in To Life and the Wedding Dance, but for the most part, the show was lacking in technical frills, which allowed for the true magic to emerge—the story. Fiddler on the Roof is, above all else, the tale of a man whose life doesn’t turn out as he thought it would. Try as he might to ensure that he and his family are provided for and happy in the way he wants them to be, he finds himself repeatedly being filled with disappointments in his children, himself, and his God. Forced to redefine what happiness, family, and faith look like, Tevye’s story really is the story of every man, despite being set in 1905 Russia.

Understanding that Tevye really is an everyman, Jonathan Hadary in the lead role was amazing. Although very different from the well-known and iconic performances of Tevye as created by Zero Mostel or Topol, which have since been imitated by thousands of actors over the past 50 years, Hadary made the role his own. His Tevye was sweet and sincere, a vulnerable man whose love for his family was evident, but also a man who uses light-heartedness as a defense mechanism, since to do otherwise would highlight the cruel injustices of life. Hadary’s Tevye remains an optimist, finding that nugget of laughter or happiness in the most grim of circumstances even when he is forced to the breaking point of sorrow. Without a trace of the gruff or hardened Tevye audiences are perhaps used to seeing, Hadary really shows the resilience of the human spirit when he is faced with adversity, disappointment, and sorrow. He can’t choose his circumstances, but he can choose how he reacts to them and Hadary chooses to see the world with rose colored glasses. It was a refreshing take on the role and brought a whole new perspective to the show.

Also amazing in the production were Joshua Morgan as tailor Motel Kamzoil, and Maria Rizzo as Tevye’s daughter, Chava. Most of the actors in the show, in fact, were very talented, but the performances by Morgan and Rizzo stood out because, like Hadary, they found unique approaches to their characters. Instead of simply being nervous and squirrelly, Morgan’s Motel was more focused and driven. Still a bit socially awkward and clumsy, Morgan was able to keep the loveable aspects of Motel while proving to be more assertive and ambitious than he appears. Similarly, Rizzo’s Chava was not ,merely headstrong, but was, instead, curious, soft-hearted, and wise.

Director Smith was also wise in choosing to cast a large group of local performers whose onstage chemistry as an ensemble was incredible. Knowing that these actors are friends both on and offstage produced an energy that was palpable and evident, as each scene and musical number found the performers in total and complete synchronicity. It also made the eviction of the Jews by the Russians so much more powerfully sad. Not only were the Jews in the show seen as the victims of the Imperialist edicts, but the Russians were as well, to some degree, since their pain in having to force their friends out of their homes was unmistakable. This camaraderie was where the real magic of the production happened. Fiddler on the Roof is a show about love, family, and community. To distinguish this version from every other one required something special and, in casting such a well-meshed collective of performers who clearly formed a community of love and became a family, the end result is a tightly-knit show, simple but lovely, and definitely special. This isn’t the movie, nor is it your average decent production. Fiddler on the Roof at Arena Stage has heart. And that’s so much better.