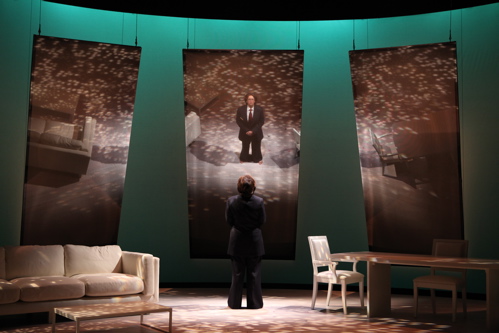 Anna Deavere Smith in Second Stage's production of Let Me Down Easy, directed by Leonard Foglia. Photo by Joan Marcus.

Twenty voices culled from three hundred interviews over three continents, all brought to life by one woman.

Baltimore native, MacArthur Award recipient, and something of a brilliant medium – Anna Deavere Smith has launched the national tour of Second Stage’s production Let Me Down Easy. Playing now through February 13 at Arena Stage, it’s a powerful exploration of the difficulties American culture has with death and disease, how we define strength, and the current inequality of our healthcare system. Its power doesn’t come from a slap, however. As a friend who came with me to press night aptly commented, “sometimes a gentle nudge to wake you up is more appreciated than a harsh shake.”

That doesn’t mean the piece doesn’t pack a punch. Embodying twenty individuals whose words are directly taken from their interviews, Smith weaves both the sadness and the hilarity of the human condition into a tone poem on what it means to face the end of life. From Eve Ensler’s uproarious theory of “who’s in their vagina?” to Joel Siegel’s dropping his clown mask as he faces cancer, it’s an experience of fascinating observations and appalling truths. Smith doesn’t hit the audience over the head with strident political activism or calls to action – it’s simply the stories that weave the message, and it’s for you to hear and be affected as you will. I find that to be very brave, and left with a feeling of being both uplifted and released at the same time.

Let me down easy? Yes. That’s how I’d like to go. END_OF_DOCUMENT_TOKEN_TO_BE_REPLACED