Last Saturday afternoon, a small group of us were lucky to attend a wine tasting at Bistrot Lepic, courtesy of managing partner Cyrille Brenac. Tucked into a cosy sun-drenched room at the back of the upstairs wine bar, far from the chaos of the crowds on Embassy Row, fellow WLDC author Max and I joined a few readers to learn more about French wine from one of the top authorities in the city. Sampling eight wines in two hours – four whites and four reds from various regions in France – we came away more comfortable on the subject and eager to learn more.

Throughout, I was amazed by the vast knowledge Cyrille shared and though I’ll try to hit the highlights, I can’t hope to replicate it. Luckily, every Tuesday evening from 6pm to 9pm, you can attend a complimentary wine tasting there yourself and I highly recommend it.

So, where to start… How about the mystery behind how you actually taste wine? What are you supposed to do when the glass is placed before you? What about that pesky cork? END_OF_DOCUMENT_TOKEN_TO_BE_REPLACED This event is now full. Thanks for your interest!

If it were up to me, no one would ever be intimidated about ordering wine ever again. So this Saturday afternoon (May 8) I’m hosting a small gathering at Bistrot Lepic’s upstairs wine bar, where owner Cyrille Brenac will help you understand the mystique of the vine with a flight of three of his favorite wines from Lepic’s collection. It’s informal and complimentary, in a lovely relaxed setting featuring some of the best French wines in the city.

The catch? Limited guest list. So if you’d like to come mingle with me and fellow WLDC author Max Cook as we learn about French wine from Cyrille and document it for a Drinks Special article next week, please respond below (and don’t forget to use a real email address when you fill out the comment form so I can reach you!) and I’ll hook you up with all the details. The reason so many people are willing to overlook the process is the result, one of the most luxuriant tastes on earth. END_OF_DOCUMENT_TOKEN_TO_BE_REPLACED

Snowpocalypse hangover gotcha down? Feeling a bit battered by slush and shoveling? Bistrot Lepic has launched its new Tuesday Happy Hour program in the upstairs wine bar, and from 6pm to 8pm tonight you can try complimentary pours from its extensive wine list. Co-Owner and Managing Partner Cyrille Brenac will choose some of the more unique wines off the 160 bottle collection for you to try, and will switch it up weekly. Tonight features a 2008 Sauvignon Blanc Quincy, Domaine de Chevilly.

I love this wine bar’s quiet and intimate setting (but especially the mural of the helpful pigs) and its cosy, terribly sexy ambience is just the thing to stave off any holiday blues. Why so tired, people? A little worn out from partying with us last night(hmm… maybe it’s just me)? Well, it’s time to celebrate again! I hope most of you have a three-day weekend to look forward to, with fireworks and grilling and sun-soaking. My advice? Add some bubbles.

A lot of people think champagne is just for snobs. Those people are wrong. WRONG. But I understand. The whole “blow it all on table service and a bottle of Cristal” movement killed simple enjoyment of champagne for many people. Just forget about those excess junkies. Champagne isn’t so very different from beer. I mean, they both have bubbles, right? Ok, perhaps I’m pushing it here but I firmly believe that champagne should be enjoyed all the time, and especially in the summer. There’s something about a chill glass of the fizz that reminds me to slow down, relax and smile.

You can enjoy the bubbly all over town. But I have a few spots that pop to mind when I want to pop the cork. And I’m happy to share a little tour of where I would go right now to inbibe. Tops on the list currently? Belga Cafe and its divine basil champagne cocktail. 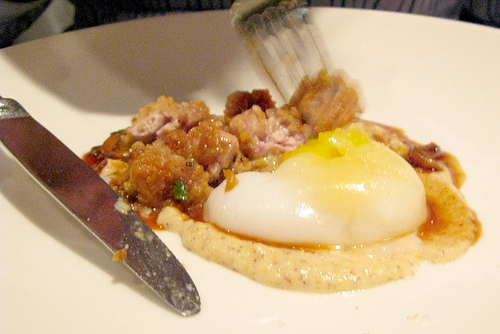 Our continuing quest to try all 100 foods a DC Omnivore must experience checks out sweetbreads.

There are a few items on the Omnivore 100 list that will elicit a very strong reaction. Sweetbreads certainly has to be one of them. I think there’s no middle ground here, as with, say, sea urchin, you either love it or you hate it.

To the uninitiated, sweetbreads are classified as offal, and are the thymus gland of veal, beef, lamb, or pork. Most of the sweetbreads I’ve been served are veal or lamb, and indeed according to the venerable Fannie Farmer, only veal sweetbreads should rightly be considered (and in the 1918 edition, actually recommended for the “convalescent,” so as I’m sitting here wasting away from flu, a plate of sweetbreads is sounding pretty delicious…).

It’s hard to adequately describe the taste, but I’ll give it a whirl – properly prepared, veal sweetbreads are slightly firm giving way to a creamy, almost gelatinous succulence. Velvety also comes to mind. I’ve found veal has a more delicate flavor than lamb.