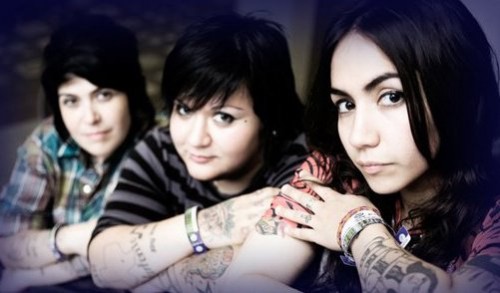 photo courtesy of Girl In A Coma

Get your mid-week dose of rock tonight with Girl In A Coma at DC9. This female trio of hotties from San Antonio, TX play dramatic, punk/rockabilly-tinged rock & roll. Vocalist Nina Diaz has a strong, captivating voice that has been compared to country icon Patsy Cline. The band formed when drummer Phanie Diaz and bassist Jenn Alva bonded in Junior High art class over a mutual love of The Smiths and Nirvana. In 2006, after seeing them perform at New York’s Knitting Factory Joan Jett signed the band to her label, Blackheart Records. The band’s name is a nod to The Smiths’ song “Girlfriend In A Coma,” and they even lived out their teen dream and toured opening for Morrissey in 2007. Girl In A Coma are currently on tour in support of their fourth album, Exits & All the Rest, released on November 1st on Blackheart Records. Check out their video for “Clumsy Sky” here.