Last time the Wizards took on the Bobcats they were outplayed in a 93-85 loss. Tonight the Wizards had their revenge in a 108-75 blowout.

In the second game of the post-Arenas era, Nick Young continues to score points in his new starting role. He took shots from all over the field and went 8-13 for 21 points.

Kurt Hinrich also looked great tonight as he weaved through the Charlotte defense. With 11 assists and 18 points he knew when to facilitate and when to take the shot. I asked Kurt about an expanded role with this new team and he replied, “I’ve been playing a lot of minutes, I feel comfortable playing as a point guard and the guys have just been doing a good job moving the ball.”

END_OF_DOCUMENT_TOKEN_TO_BE_REPLACED 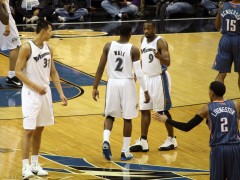 We know it makes champions, and it was certainly the key to the Wizards victory against the Rockets this past Wednesday. However defense was also a weak point coming into tonight’s game against the Charlotte Bobcats- the Wiz were 24th in the league allowing 106 points per game to opponents. Charlotte on the other hand entered the game 8th in the NBA in points allowed per game with 95.63.

So who’s defense would match up tonight? Would we see the Wizard’s continue with their tough defense that was displayed against Houston or will Charlotte stifle the Wiz?

The answer was neither.