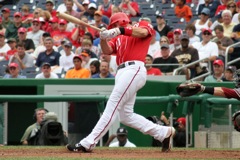 Not everything was at it seemed to be at the Nationals game this afternoon.  What was expected to be a fairly full house to watch Stephen Strasburg, was a half-full park of enthusiastic fans.  What was expected to be a show of dominance by Strasburg, was an effective, but not errorless, five inning outing by Strasburg.  Four protestors ran onto the field in the bottom of the fifth to protest the decision to hold the All Star Game in Arizona next year, and were eventually lead off the field.

But, in the end, it was a win.  Not a pretty win, by any stretch of the imagination, but home runs from Josh Willingham and Ryan Zimmerman lead the Nationals to a 5-3 win and a 2-1 series win over the Diamondbacks this afternoon at Nationals Park.  Stephen Strasburg would put in five innings of work, with 85 pitches thrown, and seven strikeouts, all swinging.  He was having some command issues, though, and after getting ahead in the count, he would sometimes struggle to finish the job.  That’s part of his learning process, and something he’ll need to master. END_OF_DOCUMENT_TOKEN_TO_BE_REPLACED 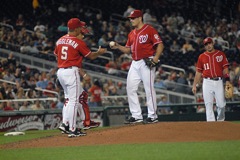