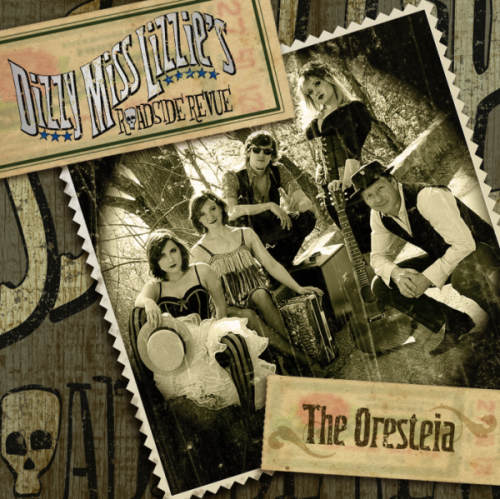 Though I still stand by my original thinking that one of the chief joys of Fringe is seeing theater in the raw, as it were, scrappy and imperfect in rough and ready locations – sometimes I have to admit that can hinder as well. Dizzy Miss Lizzie’s Roadside Revue Presents The Oresteia, a funny and subversive retelling of the Aeschylus play, suffers from venue pains. Contained in the run-down Church Street Theater, it’s hindered by the confines of a proscenium stage. Despite the best efforts of a lively cast, the location really clips its wings. Chief among the venue problems is the sound quality – it’s plagued by bad miking that jars the ears and disconnects you from some truly great vocal pipes.

But, if you can get beyond that, there’s meat here. A lot of gusto in the retelling by company members Steve McWilliams (music) and Debra Buonaccorsi (direction), which takes the classic Greek tragedy pitting the old forces of matriarchal blood revenge against the new forces of patriarchal justice (or as my poker-faced drama professor called it, “the rise of the phallus”) and shakes it up with rock-n-roll, burlesque, and lots of profanity. The cast makes a valiant effort to get you in the mood upon entering, by busking cheap beer and flirting with the audience. But the theater’s not built to encourage much interaction and that’s a pity. Once the show starts the action is pretty much confined to the stage, and almost seems crammed in those confines. It erupts through in a couple of places where the gutsy singing just can’t be cramped.
END_OF_DOCUMENT_TOKEN_TO_BE_REPLACED