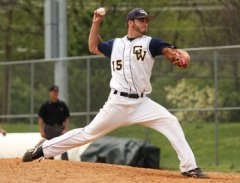 Reader Robert Lintott pointed out to me that GW had a student baseball player picked in the recent MLB draft as well, in round 13. Pat Lehman hails from Jersey originally, so he’s not one of our native sons, but he adopted our city for four years and was drafted by the Nationals. Congrats Pat – hope you’re happy to be staying in the area.

George Mason’s record number of players drafted in one year bumped to six when Shawn Griffith was drafted in the 37th round. Griffith’s a Florida boy like me, though he hails from the Gulf coast in St. Petersburg. Five George Mason University students, three of them local to the area, were picked in the MLB draft yesterday. Left Fielder Scott Krieger is from the Towson, MD area and was a 19th round pick. Jordan Flasher is a pitcher from the Manassas, VA area and was a 21st round pick. Justin Bour was picked in the 25th round and hails from Centreville, VA. Congratulations to them and to GMU, which has never had five players drafted in a single season before.