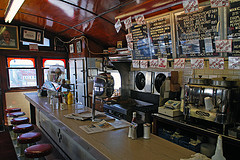 You might’ve caught the Washington City Paper’s piece this morning on the soon-to-be delivered Capital City Diner, about an old rail-car-style diner from upstate New York being moved to DC to be put up in Trinidad. If you missed it, it’s well worth the read, so head on over, and then click back.

Today, as it turns out, is the move-in day for the diner itself, being delivered to its new home over in Trinidad on the back of a semi. One slight problem: DCRA has not, and apparently will not, approve the foundation that the diner is due to be sitting on. According to their twitter feed, at one point a DCRA inspector came and left without approving the foundation, and after a few back & forth tweets, it seems that DCRA themselves headed out to the site to get things resolved, but not before the diner was given a parking ticket by the city. Now, I’m not exactly sure the last time an entire restaurant was given a parking ticket, but I have to feel for Matt Ashburn, who must feel like insult is being added to injury at this point. Young and Hungry has some more detail as well.

[Update]: DCist has talked with Ashburn, and he’s gotten permission to put the diner on the foundation. We’re still waiting to hear back from @dcra on Twitter, here’s hoping we can get to the bottom of what happened.

[Update 2]: DCRA has put up a couple public replies about what happened today: “But he had some serious issues with architect who took advantage of them.” and “But architect essentially forged engineer’s signature. The REAL engineer confirmed this.” Ouch! That’s shady shady shady! Fortunately, DCRA & Capital City Diner are kissing & making up. From @dcra: “The @capcitydiner guys are great and are now doing the right thing. We’ll do anything they need to make it happen.”