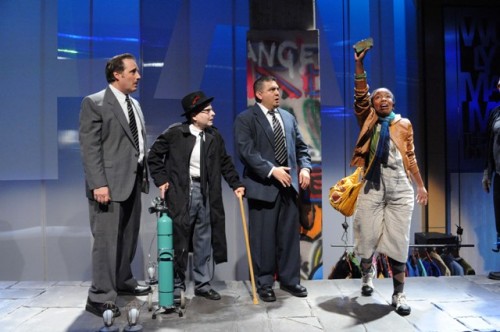 Twenty years ago this week, the Berlin Wall fell. It seemed proof positive that an overwhelming force of people could make a change for good, a stand against government oppression, by sheer numbers and tenacity, forever dispelling the myth of public apathy. Still true?

Woolly Mammoth’s production of Charles L. Mee’s rather chaotic “Full Circle” pushes and pulls the audience, moving around multiple physical settings in an attempt to put you in that head space of the crowd at the falling of the Berlin Wall. Are we meant to be spectators or participants? Maybe both.

The play is a riff on the original Chinese myth of the chalk circle, which in turn inspired Bertolt Brecht’s “Caucausian Chalk Circle.” There are certainly Brechtian moments in this production. Brecht’s own Berliner Ensemble features in the play, with its later director Heiner Muller even a character. He’s performed by Woolly’s Artistic Director Howard Shalwitz. How’s that for full circle? It’s a classic piece of Brechtian detachment.

Do you need to know any of this deeper theatrical knowledge to enjoy the play? I’m not sure, because as I have that knowledge, it completely informed my experience. I have a feeling just as a participant in a crowd experiences different aspects, so will audience members here. Democrat, Republican, Libertarian, Artist  – they’re all here. Every character is an archetype – we’ve even got Warren Buffet making a deus ex machina appearance!