Had enough of the tourists yet?  Not only do they stand on the left of Metro escalators and block entire sidewalks with their matching-t-shirt armies, half of what they’re saying about the monuments and memorials in our city is wrong.  The Lincoln Memorial is the subject of several monumental myths, so this week we’ll look at myths regarding our 16th President: is Robert E. Lee sculpted into the back of Lincoln’s head at the Lincoln Memorial?  Are Lincoln’s hands supposed to be showing his initials in American Sign Language? And why is  a portrait of George Washington hanging at the Lincoln Presidential Box at Fords’ Theatre?
END_OF_DOCUMENT_TOKEN_TO_BE_REPLACED 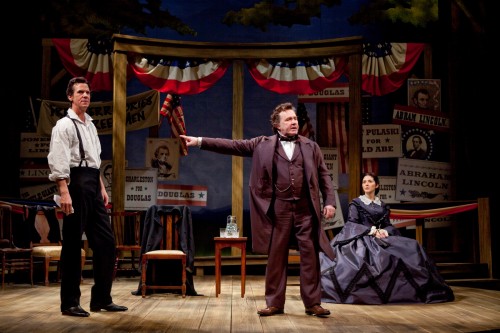 END_OF_DOCUMENT_TOKEN_TO_BE_REPLACED

Last night, Ford’s Theatre re-opened its museum after nearly two years of extensive renovation. The result is a transformed space that magnificently shows off the National Park Service and Ford’s Theater Society’s remarkable collection of artifacts of President Lincoln and the events surrounding his assassination on April 14, 1865.

The museum now tells the story of Lincoln from his arrival in Washington in 1861 through the Civil War and the sudden end of his life. Lauren Beyea, the museum’s publicist, explained that they “tried to create a greater sense of the context of what Lincoln’s life was like when he was in Washington. The city doesn’t have anything like that – we have monuments and things that are in tribute to him scattered around the District. But being Ford’s Theatre and storytellers ourselves, we thought it would be a great opportunity to really embrace the history that surrounds this place as well as Lincoln himself.”

So what can visitors expect now? END_OF_DOCUMENT_TOKEN_TO_BE_REPLACED

It seemed eerie and yet fitting that as I was rushing to get to Ford’s Theatre I was delayed by a major traffic jam as the President was attending an event downtown. People were lining the streets to catch a glimpse of the man who counts Lincoln as a guide, and I was on the way to see a tech rehearsal of a musical on the Civil War, in the theater where Lincoln fell. Sometimes the line between the present and the past in this town gets blurred in a truly palpable way. It’s manifest in the remarkable renovation of this living museum.

Ford’s Theatre’s reopening season continues this month with “The Civil War,” a Tony-nominated musical opening tonight and in performance through May 24. I’m very impressed by the renovated space. Last time I saw a show in this theater it was a bit clunky, and that’s being charitable. Now they are up-to-date, with all new lighting, sound and visual equipment – it’s a bit snazzy actually! And those infamously uncomfortable seats and obstructed sightlines are a thing of the past. It looks to be an admirable job updating the theater while maintaining its historical and monumental status.

With all the tourists pouring into our city this week, I hope many of them take the chance to see the renovations and catch a show. “The Civil War” sounded quite rousing musically, a little bit bluesy, with some incredible vocalists, live musicians, and moving visuals. Get some important history mixed in with your cherry blossoms.