Volta Bureau is an electronic trio based in DC. The group is made up of DJs/producers/instrumentalists/vocalists Will Eastman, Miguel Lacsamana (Micah Vellian) and Bernard Farley (Outputmessage). Almost exactly a year ago I had the pleasure of asking Miguel a few questions as the group was just starting to play out. It’s been a busy year for Volta Bureau, with live performances, high-profile DJ sets, and worldwide acclaim for their tracks. They’re in full-force and ready to kick off the next year with more live shows, new recordings and remixes. Tonight you can experience their magic live as they take over the mainstage of Black Cat.
Alexia: Just a year ago you were playing your first show as a live act- so much has happened in the past year for you- what have been some personal high points?
Miguel:Hearing Pete Tong, Annie Mac and Toddla T talk about Alley Cat was pretty ace, but the fact that we are getting to do this at all is probably the biggest high point for me.
Will: Aw man, the year has passed really quickly. As Miguel mentioned, Pete Tong playing our track and shouting it out on BBC Radio 1 was really amazing and surreal after following his show for so long. Playing live at U Street Music Hall‘s second anniversary was a really special moment for me. It was a culmination of a lot of things I’d be working very hard on for awhile. Going to Miami and playing WMC with the guys and just having lots of good times being creative and laughing and playing music with my buds has been the best part.
Alexia: Volta Bureau has done a lot of appearances doing DJ sets- is there a plan to do more live shows in the future? Which do you prefer?
Miguel: We are definitely planning to do more live shows.
Will: We originally conceived of Volta Bureau as a live band. We’re all three DJs and doing DJ sets is important to us, but the live performance is something we’ve put a lot of thought and planning into. We’ve wanted to refine it and practice a lot before rolling it out. I think we’re now at a stage where we’re ready to do more live shows outside of DC and we’re looking forward to making that a priority for 2013. END_OF_DOCUMENT_TOKEN_TO_BE_REPLACED 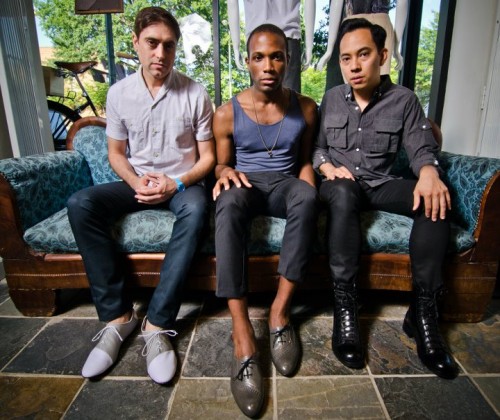 This week I had a chance to chat with Miguel, aka Micah Vellian, and ask him a few questions about Volta Bureau. END_OF_DOCUMENT_TOKEN_TO_BE_REPLACED