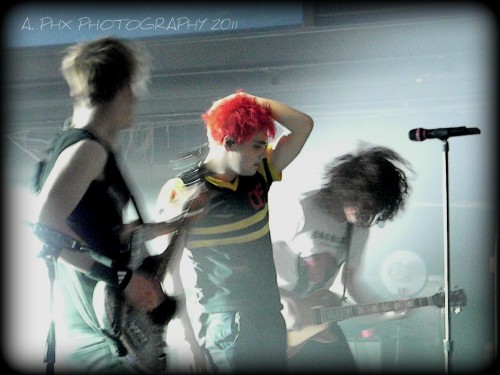 When I arrived at the 9:30 club on Tuesday night, I could hardly believe my eyes. It was about fifteen minutes until the 7pm door time, and the line was outrageous! It looked to be at least four people wide or more, and stretched almost three full blocks! When I joined the end of the massive line I began to feel a little bit out of place. From a glance it seemed that, oh, maybe 90% of the people in line were teens or tweens. And most of the rest looked to be the parents of said teens. Maybe I shouldn’t have been surprised. The thing is I’d never been to a My Chemical Romance show before, though I’ve been listening to them (and ok I admit it loving them- does this count as a guilty pleasure?) since the release of their second album “Three Cheers for Sweet Revenge” in 2004. Anyway, once the massive line snaked its way inside the club the darkness helped equalize everyone, so it didn’t matter if I was one of the few adults without kids in tow. (More to come later about the pros & cons of a teen audience.*) END_OF_DOCUMENT_TOKEN_TO_BE_REPLACED