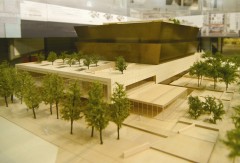 The design concept for the National Museum of African American History and Culture has been revised, and the building will now be 17 percent smaller than the original architectural plan.  Although the building will be smaller, according to The Washington Post, the edited design was “favorably reviewed by the National Capital Planning Commission (NCPC)”.

The architecture team of Freelon Adjaye Bond/SmithGroup won the contract to design and build the museum in April 2009, and the Smithsonian museum will be located at Constitution Avenue between 14th and 15th streets NW.  Construction is expected to begin in 2012.

The museum will be the last Smithsonian museum to be built on the National Mall.

Click here and here to learn more about the planned project from NCPC.