For most of the country the main headline coming out of the Washington Wizards’ first game of the season was the boos directed towards ex-Kardashian Kris Humphries. I feel bad for NBA fans and coaches who probably have no idea why Humphries is the most hated person in the league.

For DC and the rest of Wizards Nation, they saw yet another game slip through Washington’s hands as the Wiz went from a 37-16 lead over the Nets to a 84-90 defeat Monday night. The main Wizards headlines consisted of Andray Blatche being Andray Blatche in the locker room. After kicking off the game by addressing the crowd as the team’s “captain”, he ended the night addressing reporters in the locker room with complaints about the play-calling, telling reporters and Twitter that he needs the ball in the paint.

This isn’t the start the Wizards were looking for. Not only are fans already writing off the team as the one that hasn’t won more than 26 games in the past three years- but they are also growing tired of Blatche, who the team signed to a five-year extension back in September 2010. As for Blatche, he has one thing to say to the fans and media: shut up.

END_OF_DOCUMENT_TOKEN_TO_BE_REPLACED 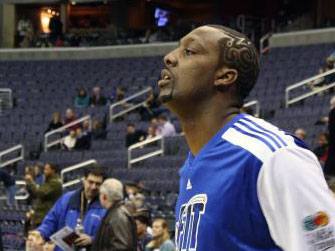