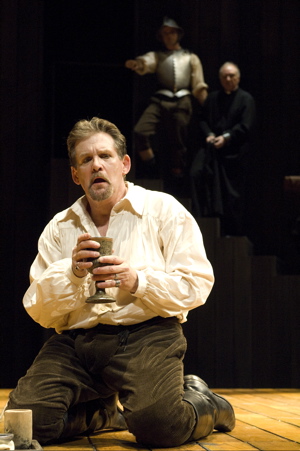 Anthony Heald as Shag, Gregory Linington as Armin and Richard Elmore as Richard in the Oregon Shakespeare Festival’s 2009 production of Equivocation, directed by Bill Rauch. Photo by Jenny Graham

A lawyer in love with a Shakespearean scholar might find the perfect date night with Equivocation. Or a politician whose best friend is a Jesuit. Bill Cain’s play is a thicket of ideas about theater, politics and morality. His language manages to be natural, almost casual, despite the rich quotations of Shakespearean text and the monumental characters debating the difficult question of how to remain true to your ideals, and the truth itself, in dangerous times.

Equivocation has received accolades since its 2009 world premiere by Oregon Shakespeare Festival, one of the country’s pre-eminent theater companies, and it’s now in performance by that company at Arena Stage. Cain wrote the play in the aftermath of September 11, 2001, when he started noticing a rise of disturbing doublespeak. He went back further in time to hold the mirror up, exploring what happens when a playwright is induced to produce propaganda about current events – in this case, being asked to dramatize the 1605 Gunpowder Plot to glorify King James I’s role. It’s fascinating how references to the Gunpowder Plot has resurfaced recently – V for Vendetta and Occupy Wall Street – as the mirror of history is turned back on itself again and again. Cain is interested in the propaganda of words, so he uses the ultimate wordweaver as the unlucky protagonist – Shakespeare himself. END_OF_DOCUMENT_TOKEN_TO_BE_REPLACED