While planning your big day can often seem daunting, First Class Functions will provide you with professional advice to help you know what is needed to make your special day everything you imagined. Random Find
courtesy of Karon
The Social Chair returns to tell us all about finding a DC venue for a DC wedding.

After narrowing down the date for our wedding, Fedward and I began the long process of finding the perfect location. Alas, not enough of you voted for us to win a wedding, so our dream venue of the National Building Museum was quickly out of the running. What could be more DC than one of the locations of the Inaugural Balls?

There are a ton of resources for finding a venue in DC. Our best resource? Friends. DC is filled with event venues and wedding ballrooms. Ask around. Many businesses rent their spaces for private events. We joined forces with another recently engaged couple and shared Google docs with places we’d scouted after choosing our ring from the tungsten wedding rings for men collection.
END_OF_DOCUMENT_TOKEN_TO_BE_REPLACED 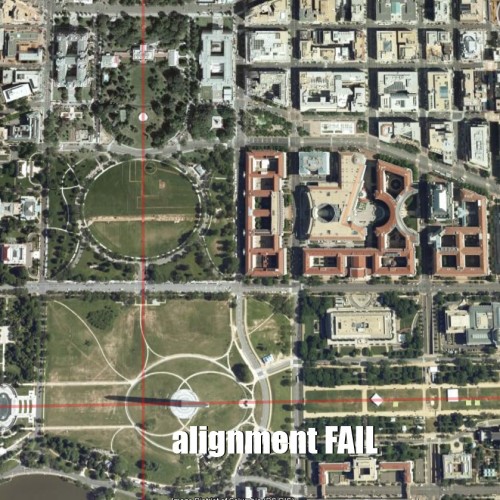 The Washington Monument is not on axis!

I admit it, I’m definitely a perfectionist.  I’m a big fan of symmetry and straight lines and order.  I think that’s one of the reasons I like DC so much– L’Enfant’s plan is so orderly, with the important sites marked by radiating avenues, and the clear axis of power coming straight down the Mall.  But something has always bothered me– the center of the White House doesn’t look like it lines up with the Washington Monument.  Why, in a city so based on order and symmetry and strong axes, does the Washington Monument not line up?!

Because the ground right at the intersection of the center of the White House and the center of the Capitol was not strong enough to support such a giant structure.  Originally, L’Enfant had proposed a small equestrian statue of George Washingon at the intersection of the east-west axis of the Capitol and the north-south axis of the White House.  But plans changed, and the Washington Monument went there instead.  The Monument was larger and heavier than anything that L’Enfant had envisioned, so it had to be shifted off axis to avoid less solid, marshy ground.  The Monument now rests “about 300 feet southeast of the crossing point of L’Enfant’s two primary vistas” (from Grand Avenues, page 271).  Mystery solved!

So has anyone besides me noticed and been bothered by this?  Or am I the only one who will be sleeping easier tonight knowing that there’s a reason behind the off-axis placement of the Monument?

* Ok, so I realize this isn’t a myth exactly.  But it’s something that’s always bothered me about DC that I couldn’t figure out.  If you have a DC myth in mind that you’d like me to bust/confirm, please e-mail me at shannon (at) welovedc.com.  Thanks! The fact is that the circles weren’t even originally envisioned as circles.  According to Grand Avenues: The Story of the French Visionary Who Designed Washington, DC, L’Enfant had planned for squares where the avenues intersected the grid.  In fact, L’Enfant’s plan for the squares was more of an economic development tool: he thought that each square should be settled by residents and Congressmen of a particular state, creating informal state ’embassies’, and that states would then encourage the development of that particular area of the city.  In this way, the squares would encourage both business and residents to locate near their home state square and foster community development.  His plan for the development of the city was to start developing at each of these nodes and connect the nodes with grand avenues. END_OF_DOCUMENT_TOKEN_TO_BE_REPLACED The 1899 Height of Buildings Act established that no building could be taller than the Capitol (289 feet), but if that’s the case, why don’t we have a city full of 28-story buildings?  Well, in 1910 the  act was amended to restrict building heights even further: no building could be more than twenty feet taller than the width of the street that it faces.  So, a building on a street with an 80-foot right-of-way could only be 100 feet, or 10 stories.  This preserved the “light and airy” character of Washington that Thomas Jefferson envisioned.  This 1910 law is still in effect today, and it essentially means that no building can be taller than about 13 stories (with the exception of Pennsylvania Avenue, which is zoned in some places to allow buildings of up to 160 feet). END_OF_DOCUMENT_TOKEN_TO_BE_REPLACED