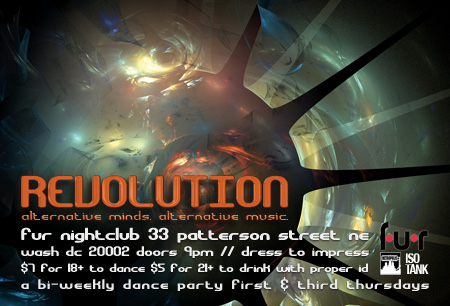 This Thursday the DC alternative music scene makes its return to a proper dance club with the launch party of “Revolution” at FUR Nightclub. For years industrial, goth, 80’s, and punk music has been surviving (and in some cases thriving) in basements and bars around the DC area. The underground was not always relegated to the shadows in this town however. For the first fifteen years that I lived in the DC area, there was always a large format dance club giving Industrial/Goth/Punk/80’s dance music a home. Cavernous clubs with huge dance floors and sick sound systems lending themselves once-a-week to the alternative crowd for epic dance parties. For many, these clubs were the epicenter of not just music but also of a thriving nightlife community. Hell, I met my wife at one of those clubs and had my wedding reception after-party at another!

It has been too long since a kick-ass, proper dance club has opened its doors on a regular basis to this scene. This Thursday the Industrial/Goth/Punk scene will come roaring out of the underground and take over FUR Nightclub for the first of a bi-weekly, genre, dance-party called “Revolution”. I was invited to be one of the DJs for this awesome event and I happily accepted. After speaking with the event organizers it was obvious to me that we share the same idea about bringing these genres to one of DC’s nicest and most well-equipped dance clubs. The organizers, the other DJs, and I are all dedicated to creating a great dance party that won’t simply evoke the old, scene, dance clubs; we are determined to create a unique event that will hopefully grow to become legendary in its own right. With a great sense of history for the Industrial/Goth/Punk/80’s scene in DC, we all hope to begin a new era of massive dance parties with our party “Revolution” at FUR. END_OF_DOCUMENT_TOKEN_TO_BE_REPLACED