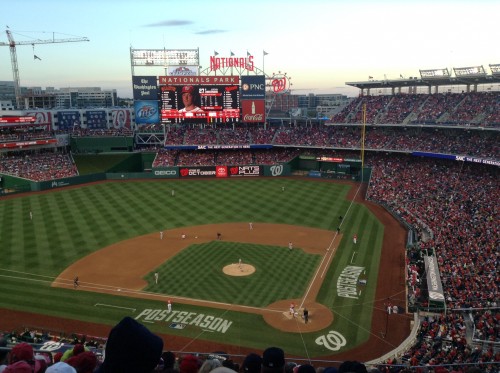 END_OF_DOCUMENT_TOKEN_TO_BE_REPLACED

A strong pitching performance from Chicago Cubs right-handed starter Jason Hammel stifled the Nationals’ attempt at a Fourth of July victory in Washington on Friday afternoon. Chicago beat Washington 7-2 and Nats right-handed starting pitcher Tanner Roark didn’t look quite as sharp as he had earlier this season.

Roark pitched seven innings while giving up four runs and one homerun on nine hits. He walked one batter and struck out five on 87 pitches (61 strikes). Chicago came swinging right out of the gate with a pair of singles off Roark to start the game. Leadoff man and outfielder Chris Coghlan scored on a ground out hit by Cubs first baseman Anthony Rizzo giving Chicago their early 1-0 lead.

END_OF_DOCUMENT_TOKEN_TO_BE_REPLACED Washington Nationals right-handed starting pitcher Tanner Roark notched a career-first on Saturday afternoon when he threw a  three-hit complete game shutout to beat the San Diego Padres 4-0. Roark threw 105 pitches and 73 strikes while walking one batter and striking out eight as he led the Nats to their second win of the three game series.

An early offensive rally for Washington against the Padres’ right-handed pitcher Andrew Cashner initiated the eventual win by putting the Nats up 3-0 in the first inning. After a leadoff fly out to right field hit by outfielder Denard Span, the next four Nats batters reached base.

END_OF_DOCUMENT_TOKEN_TO_BE_REPLACED

A game that was well-within the Washington Nationals’ grasp got away from them on Monday night during an eighth inning implosion from right-handed reliever Tyler Clippard allowing the Los Angeles Angels to win 4-2 in D.C.

Clippard’s 2/3 innings of work resulted in three hits, a walk, a strike out, and four unearned runs. Manager Matt Williams emphasized that he thinks Clippard is making quality pitches but he hasn’t found much consistency with his fast ball and couldn’t find his change-up either. Williams is confident that Clippard is still the Nats’ eighth inning man but with more outings like Monday night’s he’ll really have to start to find some consistency if possible. END_OF_DOCUMENT_TOKEN_TO_BE_REPLACED Despite a turnaround from his performance earlier this season, Haren seems to have struggled in his past two starts. But the loss isn’t in Haren’s hands entirely. END_OF_DOCUMENT_TOKEN_TO_BE_REPLACED

END_OF_DOCUMENT_TOKEN_TO_BE_REPLACED