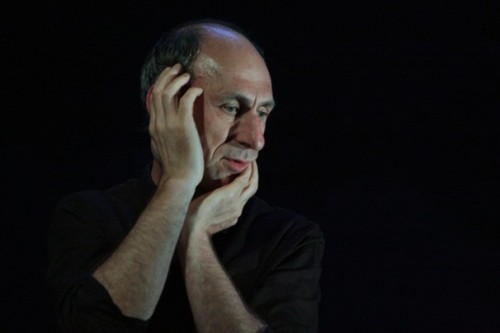 The ocean is a silent character in David Cale’s The History of Kisses at Studio Theatre, a one-man show that is currently enjoying its world premiere. Cale was inspired to write the semi-based-on-real-life piece after discovering an old photo of an unknown couple kissing on the deck of a boat. He imagines a world behind the photo filling in the details through an interconnected series of vignettes depicting romances between those in the photo, an alter-ego of himself called James, and the guests and staff working at James’ hotel. Connected by the common themes of love and a common element of the sea, Cale finds himself in the role of many characters ranging from a middle-aged divorcee to a retired Navy man-turned composer. The History of Kisses is a boat of mixed company merrily making its way to a brighter destination. The journey isn’t without a few turbulent waves however, and it suffers from a few bumps that slow down the show’s journey.