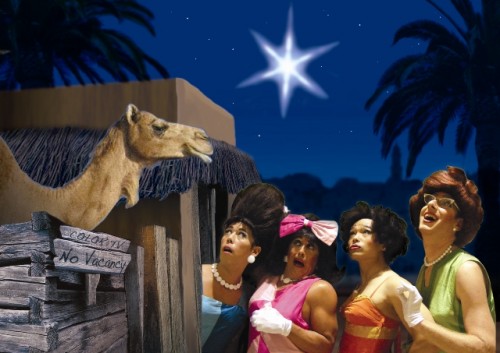 What says the holiday season better than a Dragapella Beautyshop Quartet? Rambling, raunchy, rude dragapella, with no pesky plot or fourth wall realism! Singing, dancing, kvetching dragapella – the perfect antidote to any holiday-induced blues you may be harboring.

Through January 2nd at Theater J you can catch The Kinsey Sicks, who’ve been fabulously hilarious since their beginnings years ago in San Francisco. This little variety show, clocking in at about 90 minutes, features belting queens Trampolina (Spencer Brown), Winnie (Irwin Keller), Trixie (Jeff Manabat) and Rachel (Ben Schatz) satirizing popular Christmas carols and Hanukkah songs. Don’t expect much of a plot (the girls are trying to sell their home – a manger, gotten long ago from the Christ family) but do expect to laugh your ass off at some very irreverent humor.

After all, it’s called Oy Vey in a Manger. END_OF_DOCUMENT_TOKEN_TO_BE_REPLACED