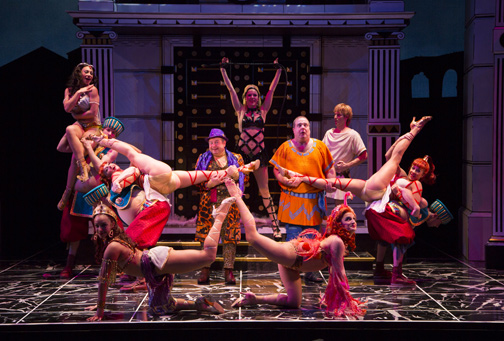 Forum tells the ribald story of a slave named Pseudolus who attempts to win his freedom by assisting his youthful master win the heart of the beautiful courtesan next door. Using the classical elements of farce and punctuated by fun melodies with clever lyrics, Forum is such a well-written show that even the most amateur of productions can be excellent. I have, in fact, seen Forum a number of times, ranging in scope from its Broadway revival in 1997 to a 40-seat community theatre production with virtually no budget, and thoroughly enjoyed it every time. This is why I was so excited to see Forum at The Shakespeare Theatre Company and why I was so disappointed in their production. If a community theatre of amateur actors, directors, and designers can take a nearly perfect script and present farcical magic, I expected one of the greatest theatres and directors in the DC area, combined with a cast of actors with numerous Broadway credits, to be incredible. And it wasn’t. END_OF_DOCUMENT_TOKEN_TO_BE_REPLACED