If you work out in Tysons Corner, your lunch options have just expanded.  Starting today, two free lunchtime shuttles will be circulating through the area every 10 minutes.  Every weekday from 10 AM to 2:30 PM, Tysons Connector buses will connect Tysons Corner Center, Tysons Galleria, and various employers in the area (check out the PDF map of the routes).  In such a car-dependent and pedestrian-unfriendly place as Tysons is today, the Tysons Connector is a welcome addition.  Finally, a good way to try out a new lunch place down the block without having to get in your car! 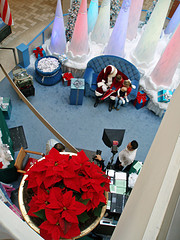 There’s a nasty suit brewing between the management of Tysons Corner Mall and Michael Graham, the bearded gentleman who has been the Tysons Santa for the last 18 years.

Graham, a carpenter from Tennessee, counts on the $30,000 he makes playing Santa, particularly since he bought a house last year. His contract was terminated on short notice, after Graham had already purchased the custom Santa suits and boots to make the whole effect as realistic as his snowy white beard. Tysons management insists that they notified Graham of the early termination of his contract; Graham says he didn’t find out about it until he called to schedule his first day of work.

The issue seems to center around how much money Graham is paid for Santa- the new events photography company the Tysons management hired says that Graham’s $175 per hour is “ten times the going rate” for mall Santas. And yes, $175 is a lot of money, but as with all things, you get what you pay for, and everyone seems to agree that Graham is a particularly excellent Santa.  If the average mall Santa is making less than 20 bucks an hour, that probably explains the cheesy fake beards, the smelly suits, and the gin breath. And it’s not like your local Santa doesn’t deal with his share of hazards- uptight parents, panicked children, biohazards from kids peeing in his lap… if you want to deliver a quality Santa experience to your shoppers, you have to pay for dedication to the work, no?

UPDATE: One of the commenters at the Washington Times story tracked down some information about what actually is the going rate for mall Santas. It looks like Mr. Graham was not so wildly overpaid at all.