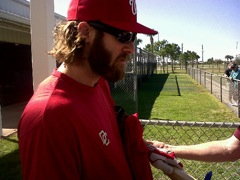 No, I don’t mean your uncle Jack’s “wife” Mimi.  I mean the best beard in DC Sports: Jayson Werth’s beard.  Pitchers and Catchers don’t technically have to report in Viera, FL until Wednesday, but several players arrived early to start their Spring preparations, and among them is new outfield Jayson Werth.

Werth was sporting a soul patch for his introduction to the team in December, but has used the off-season to cultivate an epic mountain man beard. Even Brian Blessed, upon hearing of Werth’s fresh growth, acknowledged its supremacy, saying, “Though my beard is the best in all of Britain, it cannot hold a candle to the lushness of Jayson Werth’s beard.”(1)

I mean, the beard has its own twitter account, people. How can you not love that? There may be some team rivalry going, though, as Stephen Strasburg was last seen sporting an Abe Lincoln.

(1) Brian Blessed didn’t say this. He probably should have.