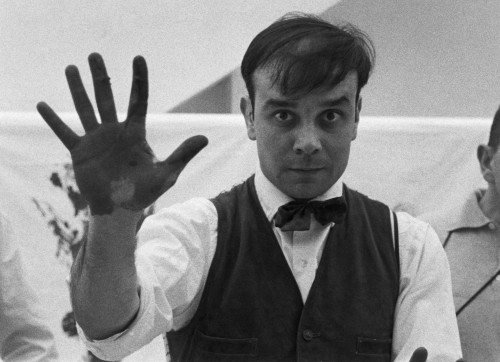 “I am the painter of space. I am not an abstract painter but, on the contrary, a figurative artist, and a realist. Let us be honest, to paint space, I must be in position. I must be in space.” – Yves Klein

Yves Klein (French, b. Nice, 1928 – 1962) was much more than just an artist, he was an innovator, a visionary, and most importantly in my opinion, a dreamer. Although Klein’s notorious career only lasted a total of 8 years [he suffered a heart attack at age 34], that was all the time it would take for him to turn the art world upside down. As one of the 20th century’s most influential artists, Klein reintroduced what art and nature could be, pushing creativity beyond the traditional notions of what was accepted.

Yves Klein: With the Void, Full Powers is the first major retrospective of the artist’s work in the US in nearly thirty years. Presenting approximately 200 pieces, the Hirshhorn Museum explores a full range of Klein’s work, examining a career that radically altered the world of art.