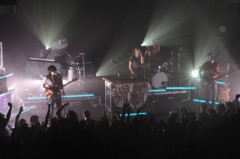 Of all the daily deal, flash sale, and flash-local-deal sale sites that have launched in the Washington area lately, none of them can quite match up to Gilt City for sophistication or excitement. While you might expect some of the deals they have offered since their launch in DC – booklets of airline tickets, fancy dining, and high-end spa packages (not the usual half-off spray tan in Fairfax or other “deals” nobody actually wants) – they also really set themselves apart with their organizing of exclusive events or VIP treatment just for Gilt City members. Thievery Corporation and My Morning Jacket have been among the entertainment featured recently, with more curated entertainment experiences yet to come.
END_OF_DOCUMENT_TOKEN_TO_BE_REPLACED