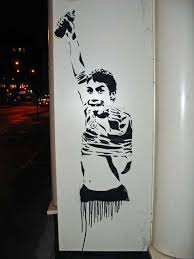 Who hasn’t noticed the tagger around town call Borf? The one who spray painted highway signs as well as walls, bins, and pretty much anything he could on a quixotic quest to tell us about Borf? Well yesterday, the police noticed him in action and we now can put a name and face to the graffiti – John Tsombikos , an 18-year-old art student from Great Falls, VA. An 18-year old they will throw the book at as an adult for defacing public or private property.

Now the debate about his painting being art or defacement aside (I happen to like some of his art), what strikes me most about the WashPost article on Borf are the quotes about his folks:

“he… cut cardboard stencils on his parents’ living room floor. He spoke sneeringly of ‘rich people,’ though sometimes when he parked in the city his parents gave him $14 for the garage.”

So not only did they know he was spray painting all over DC, they even gave him money to do so – Borf’s folks helped Borf to deface DC!! In lawyer terms that’s called aiding and abetting, and I say throw the book at Mom & Dad as well as son. He only recently turned 18, so I say the prosecutors should go after them as either parents (under 18) or accomplices (over 18), but either way, they should be out there doing community service right along with their tagging son.

Parents have a responsibility to control their kids, not give ‘em $14 and tell them “go mess up DC, not your own suburb”.