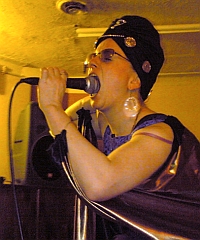 You fancy yourself a MC? You think you can be a real-life VJ? How about one who can handle a crowd? A drunk, trivia-demanding crowd? A Commander Microphone if you will? Is that you?

If so, you need to find your calling. A calling that will get you free drinks, dinner, and $25. That would be the MC spot at Wonderland Ballroom‘s Monday Night Trivia Fight. If last night was any indication, you better really be able to fight too. Like fight for your right to be right. Fisticuffs almost broke out when the winning answer to “The islands named after dogs” was revealed to be the Canary Islands.

Apparently a tangential link to the Latin word for “dog” was decreed as proof of Canary Islands as a correct answer – against the much more logical Labrador or Aleutian Islands. Okay, so maybe I was so drunk as to confuse the Aleutians with the Afghan hound, but so what – I was still closer than the Canaries, which are named after the bird, not the dog!

Even the Wikipedia backs me up! Note is says: “The name derives probably from a north African tribe (the Canarii) or possibly the Latin term Insularia Canaria meaning Island of the Dogs,” There is at least a beer’s difference between “probably” and “possibly”.

No matter, you too can be the center of controversy; I mean attention, at the Wonderland Monday Night Trivia Fight. Just be brave (or insane) and sign up. I did, and now I am on tap for February 13. Are you?