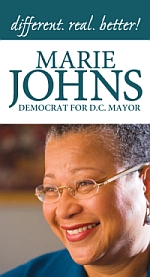 Check out the email I received from the Marie Johns for Mayor, Deputy Field Director, Michael Crawford:


I am emailing you as some of the key bloggers in the District to see if you would be interested in attending a meeting between members of the blogging community and Marie Johns.

This will be a great chance for you to hear personally from Mrs. Johns and to ask questions about the issues that are important to you. A date and time have not yet been chosen for a meeting. I assessing interest in the idea to see if it will be something that you are interested in.

Might he be calling me a “key blogger in the District” because of my amazing post volume about DC or is the Marie Johns for Mayor campaign that desperate to claw its way out of the bottom tier of mayoral candidates?

If they’re thinking to include District bloggers into the mayoral race, the Johns camping may be in for a rude surprise. As a group, we rely on high-speed internet more than the usual voter and we are highly educated about the differences in pricing and services from the different cable operators and Verizon, which Mrs. Johns lead as President of Verizon, DC.

We may back Verzion in it’s defense against the RIAA’s subpoenas but we all have Verizon horror stories and would sue for deceptive practices if we could.

Don’t even get us started on John Thorne’s tiered pricing dreams that would make us pay for Internet service twice or thrice. We would only assume you’d charge us for police presence and fire protection on a per use, as well as income tax basis.

Its only too bad that Fenty’s campaign has gone all arrogant and not replied to my query about their own blog-centric campaigning. Still no word if they have a blogger meeting or care to make a real blog.

The corruption of blogging personified by the Adrian Fenty Blog, an endless pro-Fenty profusion without the ability to comment, is more useless propaganda than participatory democracy.