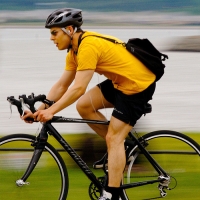 He is NOT the enemy

Following the Wash Post’s great alarmist article on the Washington and Old Dominion Trail, Channel 9 jumped on the fear-mongering bandwagon with its own “Trail Rage” news report.

While rehashing the same “cyclist are the enemy” line of the Post, but with remarkably less hysteria, Channel 9 did reveal two possible changes to the W&OD Trail system.

First, local governments and the Northern Virginia Regional Park Authority to widen the rail from eight to ten feet sometime in the distant future.

Also, NVRPA is negotiating with area police departments to add bicycle cops to the 40 trail monitors who already patrol the route.

I think their first act may to be arrest the fool on the DC Tri Club form who said:

“i try to regulate on my own at my own risk. if i am running and hear a bike and they dont announce themselves i take a quick step to the left to make them react. if they let me know they are there i wave and shift right.

i am sick of ipod wearing hot shots blazing by me at 20+, apparently just like many others. if i am putting you at risk, maybe you should shout out or ring a bell.

a half step to the left to get someones attention is not that dangerous, really only makes people ride their brakes. [When cycling] i also brake at the last minute when crossing GW pkwy to try and get cars to stop, any comment on that tactic?

Um, yeah, I think you are gonna get yourself (and someone else) seriously hurt. That half-step, asinine. The GW parkway braking, suicidal and asinine.