I knew the Curly and The Rocket “Electricshow” album launch party this Saturday would be different when a supermodel sent me a concert Evite that included these odd and tempting benefits of the $20 cover:

And now that I’ve interviewed the Curly part of that duo, I know its not only going to be different, the show is going to be amazing. Why? Let me tempt with you this tidbit from the interview with Curly:

Why the Cheeky Monkey Sideshow in your album release concert?


We wanted to bring together different kinds of artists and performers for our show. Who says seeing live music has to be an opening band and a headliner?

We also feel a kindred connection to the sideshow act – our electric power duo is live, immediate, raw, unusual and independent. I’ve always thought of it in terms of Vaudeville, Chautaqua, and the Carnie Sideshows because we’re bringing our act to the people. 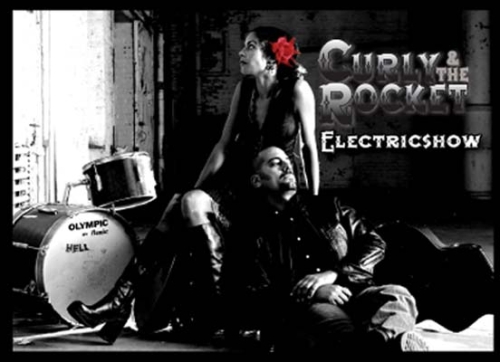 This post appeared in its original form at DC Metblogs
How would you describe your musical style?


While I play the drums and sing, Rocket plays his guitar like he’s reaching for something that’s almost beyond his reach. The words together sound kind of childlike and humorous- it’s that energy that makes what we’re doing so much fun. Our music is like tempest squalls sneaking up on a sunny day.

Why is your show an “all ages” concert?


We love the mindset of making our shows available to everyone. Seeing people play it live shouldn’t be an age exclusive experience, our sound, and the things we’re writing about, speak to a broader audience. Kids are the best fans, because they respond intuitively to music- they can pick up on the energy in it. If it’s positive and makes them feel good, they love it.

A little off-topic, but what about Smoke Free DC in 2007?


Neither of us smoke and we’ll be really happy when the smoking ban goes into effect. We lived in California when they adopted it…to us it’s a no-brainer, As a singer, it’s murder on my voice, and when you’re gigging a lot, it’s not the staying out late, but the smoke hangover that takes its toll. I’ll definitely be up for hanging out in bars more when the ban goes into effect.

Last but not least, when and where is the concert?

Doors open at 8pm sharp with a cocktail reception. If you come too fashionably late you’ll miss stuff, so be a geek and come kinda early.


Most modern entertainment is so removed from real time…but when you go to a great concert, its like a tribal experience. It’s creates a shared experience and a connection with strangers. If the energy is positive, it’s good for the spirit…

Let your hair down baby, this is rock and roll!