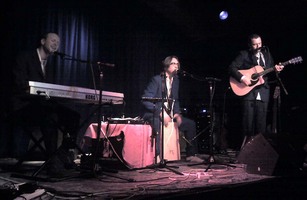 It’s been a while since I’ve written a honest concert review (at least for no money), but I figured sharing an experience with Metblog readers about one of the best bands you’re probably not listening to, The Guggenheim Grotto. They were headlining Jammin’ Java last night supported by Alfonso Velez (a Paul Simon voice with Phil Ochs song-writing, tonight @ The Black Cat) and The Sketches, performing a rare acoustic set due to their lack of a drummer for the gig.

Overall, the performances were even and well-done, some not as polished, but excusable for looseness of the setting. Mr. Velez was a pleasant surprise, bearing a level of honesty and personalization of his life around DC that helps bring you into the performance. I felt some of the riffs seemed overly familiar, but realized he was imitating as flattery and not as plagiarist. The Sketches (performing Friday, 2/16 @ The Black Cat and a soon to be released CD) were feeling restrained as an acoustic arrangement, even joking that their twisting in their seats was due to wanting to ‘rock out’, but being constrained by not being ‘plugged in’.

Of course for me, and the main draw for hoofing it to VA from MD, was catching The Guggenheim Grotto, and they did not disappoint. Hot off being on a number of “Best of…” lists for 2006, and 2007 Independent Music Awards, and gaining a US distribution deal (bar originally being sold through CD Baby), this Irish band is making their second go-round in the US, returning to Jammin’ Java for the second time (I’m kicking myself for missing the first…). Tracks of their album “…Waltzing Alone” have found their way in to TV shows and other media, besides the fact of also being regular fan favorites on radio. Their hit in the UK, “Told You So” has a familiar quality to it, and is definitely one of the catchier tunes, but of the better tracks on the CD, “A Lifetime In Heat” is, by far, the stand out lyrically and musically. The entire album is consistently good, and playable (over, and over, and over again). I’m sure as more folks end up hearing them (as I did on KCRW’s “Morning Becomes Eclectic“), they’ll be off and on their way. If anybody from other Metblog cities are readers, try to catch them if they drop in in your neighborhood.