Back at the beginning of April, I wondered Why Did Keith A. Washington Still Have a Gun?! when he threatened a real estate appraiser with a second police-issued gun after shooting two furniture delivery men, killing one, with his first police-issued gun, and trying to cover up the whole thing with a fake robbery call to PG police. 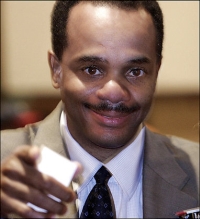 In the comments section, “Concerned Citizen” came to Washington’s defense with an unsubstantiated claim that


“Mr. King is not certified or licensed to do Home Appraisal it is speculated by authorities that he was merely trying to portray himself as a victim and colluded with others to sue Mr. Washington,

It also appears that the whole thing was fabricated by Mr. King……The attorney General of Md posted on their website the following information about Mr. King…..”

Now it seems that “Dave” posted the same rant on another site questioning Washington’s abuse of authority, resorting to personal attacks on the site owner who questioned “Dave” more than I.

Not to stop there, “Dave/Concerned Citizen” then apparently went to a third site that also calls him a danger to society. There, he was joined by “Susan” who claims to be his wife but just happens to have a uncanny similar use of too many periods:


Washington was jumped by them while his wife and daughter ran from their home screaming watching there husband and father being almost killed by two strangers…..My husband says that they had committed 4 or 5 previous burglaries before the encounter with Washington…….I that case Washington deserves a medal…how did people get it so wrong

Now I don’t know about you, but I smell blog spam. This “Dave/Concerned Citizen/Susan” sounds too much like a Keith A. Washington trying desperately to clear his name, one blog at a time.

I hope he has plenty of time to fulfill that Quixotic goal, from a gun-free jail cell.