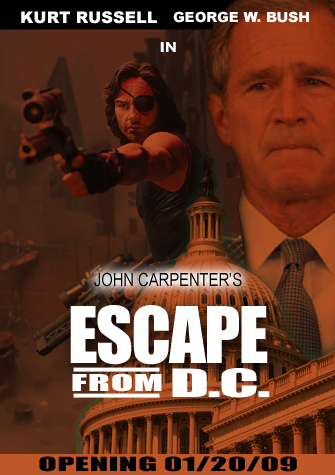 No, this isn’t really the next John Carpenter film with Snake Plissken taking aim at the White House and Congress (although, I wished it was). But it’s about mid-season for all the D.C. natives to head out of town just to catch a breather from the madness that is life in the Capitol Region.

While typically, some of these “escapes” are not traditionally vacations in the usual sense (usually only a few days), there are plenty of places both near and far to get away from it all, even if it is only for a short bit. Some folks head internally, staying at home, or spending entire days at the movie theater. Others head out past the potential “blast zone“, to places like Shenandoah, Ocean City, and even Philly (which has King Tut right now, BTW). Others will head further afield…

Tom and Tiff head to Pittsburgh, but have been heard to hit the Eastern Shore. Carl’s on leave of mind to head to the Outer Banks in North Carolina, while Doug slips off to the local mountains of the Shenandoah. Paulo has yet to have a real honeymoon, and feels a strong pull to Harpers Ferry and the John Brown Wax Museum. Jenn loves Cape May in New Jersey, even though another city such as Philly or New York could also top the bill for rapid exit from our fair city. I’m heading to Beantown (to visit the Samuel Adams Brewery as well) and Cape Cod. Even Stacey escapes… at home in Vienna… Virginia, not Austria… just by having moved there. And we all know, DC is good enough for Wayan!

Jenn did bring up a good observation about coming back from these “breathers” from DC; How do you feel about the city when you return? Better or worse than when you ‘escaped’? Have you noticed anything interesting upon your return that you may have not observed or felt being here 24/7?