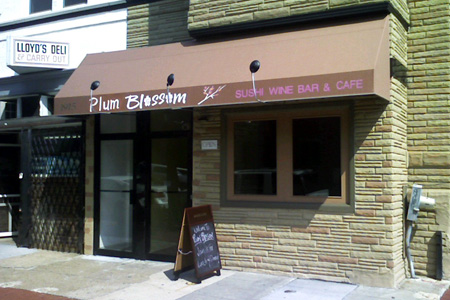 Maybe my expectations were too high? You know the drill. You’re tired of the same old restaurants in your hood and when you hear a new one will be opening you think, “Nice! Can’t wait to try it! Maybe it’ll be good?” But in the back of your mind you prepare yourself to be disappointed because 3 of the last 5 new restaurants have been bad, and one of them was only so-so.

I guess Plum Blossom, located at 18th & Willard falls into the so-so category as I wasn’t impressed and am in no hurry to go back.

The decor? Very Ikea-ish. No paintings or photos on the wall, very drab, yellow lighting, and the little tables you sit at are made of Formica (would have been so much nicer if they were wood). As a tall guy I had trouble sitting on the tiny cube seats that are less than two feet off the ground, but that wasn’t a big deal.

The service? Well, it’s a new restaurant so you have to expect some jitters. Our waiter didn’t exactly know when to take empty dishes or glasses away and kept brushing up against me when he did so. I asked him what kind of beer they had (hoping for an Asahi or a Sapporo) and he said the list was on the menu. Whoops! No it wasn’t. They only have Amstel Light (like ‘sex on a boat’), Miller Light, and Heineken. Their wine list was pretty slim too. Overall the service was pretty decent but nothing to get excited about.

The food? Ah, the food. What really makes a restaurant worth its weight in soy sauce. I thought the sushi tasted good and wasn’t chewy or fishy tasting, but the pieces were cut too thick ($6 for two pieces). I ordered the small plate of Vienamese Beef ($10) and found it to be chewy and not very flavorful. Good thing I had my handy dish of soy sauce nearby to flavor it up. My friends weren’t very impressed with their dishes either, but one of them is always disappointed since she’s a vegan.

The good thing about my experience at Plum Blossom was the plethora of attractive women there, no doubt due to the feature on Daily Candy (does every woman in town get those e-mails?).

So if you feel like sushi and want to try some place new, go for it. If not, you won’t be missing out. Stick to Sushi Taro or better yet go to Oya.