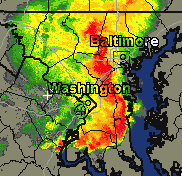 Unless your office is deep within the bowels of a bunker, you know there’s a major weather system making a bum’s rush through the DC area. I was driving back from a PT appointment in Springfield when the deluge hit my car. I’ve been through some nasty storms on the Plains, and this one ranks right up there with those. The rain was coming down in sheets, pouring sideways into my car at 30-50mph, judging by how much the cars were rocking near us. The light at Keene Mill and 395 was a real long one, as cars were hoping it would just pass by. Traffic up 395 plodded along at 45mph, heading northward into the system. Most cars were doing the right thing and flashing their hazards as the rain drenched the approach into the District.

I pulled off 395, grateful to have missed what was the worst part of the storm to the North of the city. We had several tree limbs down in Fairlington, and they were major limbs not just little branches. The guys from the association were out in their jeepneys to move the limbs off the road and keep it all clear.

Not to be too dramatic, but there are two potential systems that could hit the city later today, so I don’t think we’re quite out of the woods. A little before 4pm, one system was halfway between Charleston, WV and the Virginia/WV border, and another on the Ohio/WV border and both are on straight-line paths for DC, if conditions hold up.

If the Light is Out, it’s a Four Way Stop. If a traffic signal is out, STOP at the intersection, THEN proceed. Don’t be a jackass and blow right through like it’s not there.

In the event of a Tornado, Seek Shelter If you can see a funnel cloud, or there is one in your area head for the basement. Barring a basement, get as low as you can, and as central as possible to the house.

Don’t be out unless you have to be. In a storm like this, get inside. Don’t be that guy driving around looking for intrigue.