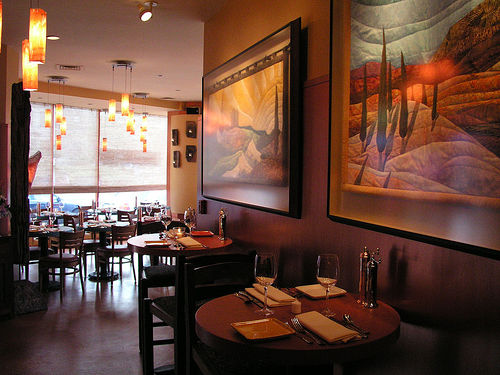 Restaurant Week, you are totally my favorite today, and you can certainly stick around. Last night, Tiffany, her brother Ben, and I took advantage of the prix fixe Restaurant Week special at Dino in Cleveland Park. Right across from the Uptown Theatre, and just a few doors down from Atomic Billiards is this wonderful cucina italiana. We had reservations at 8:15, but arrived early, planning to nurse a glass of wine at the bar until our time, but they had a table ready for us right then.

The dining room downstairs is a tightly packed alcove in the front of the restaurant, and we sat at the very edge of it. The only thing I didn’t like about dinner was being afraid I was encroaching on the personal space of the next table. But, with food like Dino’s, you forget about that in a hurry. Their Restaurant Week offering is pretty generous, with an appetizer or half-order of their pasta courses, plus any of their entrées (the bistecca alla fiorentina is the only up-charge, at $12 extra) followed by dessert and an apéritif, for $35.08.

Interior at Dino by tbridge

The appetizer selection at Dino is extensive, almost to the point of being overwhelming, but there was a Fritto Misto option at the bottom of the page. We are suckers for fried seafood appetizers generally, and calamari in particular, so that was the clear choice. Calamari is a relatively simple dish, and we tend to use it as a barometer- if the calamari is subpar, it lowers our expectations of the rest of the menu.

We needn’t have worried. When the dish arrived, Tiff tried a fried scallop, and nearly forgot her promise to share with her dinner companions. Then she tried a shrimp and nearly lost her religion. This is the best fritto misto we’ve had anywhere in DC.

Ben went with the prosciutto e pesca, which was rich with the flavor of a balsamic molasses and the delightful chewy-ness of the prosciutto, while I chose the Burrata, featuring mozzarella flown in from Campania twice a week, with oven-roasted tomatoes in olive oil and spices. It’s hard to go wrong at Dino, it seems.

For an entree, Tiff chose the Cervo, a venison steak with braised kale and mushrooms (braised with prosciutto, of course). Due to a childhood trauma involved being served venison during a discussion of the film “Bambi,” Tiff is not a deer connoisseur; in fact, this was the first time she’d eaten it since that fateful dinner. The venison was delicious – the sauce was sweet and peppery, which worked well with the wine, a 2003 Barbera d’Alba from Massolino.

I chose to go the Bistecca route, and I was definitely not disappointed. The Bistecca is quite an adventure. The beautiful, and generous, whole-rib steak was seared gently over their grill and served with oven-roasted potatoes and some mixed greens (beet greens were among them, as well as swiss chard, I think). The steak was tender and flavorful, and the greens made for an excellent counterpoint with tangy earthen flavors.

The venison was a bit chewier than the beef steak, but we chalk that up to the difference between the activity level of a typical deer vs. that of a typical cow. It was delicious, and the accompanying kale was perfect- braised just enough to make the greens flavorful, but not so much that they lost their distinctive texture.

Dessert was a difficult decision – choosing limoncello to accompany was an easy choice, as it’s our favorite after-dinner libation, but the dessert itself was a toss-up between the Cappuccino di Nutella, a nutella/cream mousse with bourbon-soaked cherries, or the Gianduia Nico, a combination of bittersweet chocolate and hazelnut gelati. Tiff went with the gelati, since I think there are few more perfect desserts in life than chocolate ice cream. We were not disappointed – both gelati were flavorful and just exactly the right level of sweet and rich. My only possible complaint is that it was served in a dish where the sides were not quite high enough- as the gelato melted, it became increasingly hard to spoon up the melty deliciousness without losing some of it over the side of the plate. The Cappucino di Nutella was a dense and luscious mousse of chocolate and nutella with bourbon cherries providing a respite from the thick, rich texture. The limoncello was an excellent pairing for both.

Dino is extending their Restaurant Week special through the rest of the month, so you can stop in any time before September and take advantage of all this awesome food. You can bet that we will.