Weeks ago I was perusing my favorite local DC food blog, metrocurean, and got inspired by the Hurricane Wine Tasting post that blogger Amanda wrote about her recent winery trip. Having been to Barboursville recently, and loved it, I was antsy to take a trip out 66 to the wineries closer by, and Amanda provided me and my group of friends with the perfect trip planner. So the six of us set out on an afternoon trip.

Our first stop was Linden Vineyards. We piled in the cars and set out with our trusty GPS to guide us. We had heard this winery was one of the best in the state, and knew it was pretty prestigious and they were serious about their wine. So we were slightly surprised when we turned onto a 3-mile dirt road, but figured, well, if they say it’s this good, I guess you gotta work for it… And so we drove, and we drove, and Matt’s car got all kinds of dirty, but finally we arrive at Linden and it’s just gorgeous. See above. The porch faces the mountain (well, hill, if you’re going to get technical I suppose), people were having picnics on the lawn, the sky was blue.

So we went inside. It’s not too terribly inviting inside, just one single counter, no tables. We had a group of six, and the sign clearly said no groups larger than six. And they mean it. Amanda’s post had warned that the porch was reserved for “members” (ie: people who have bought a case of Linden wine during the calendar year). I didn’t think it would be quite so strict. It was that strict. We tasted our wine, and were reminded that the porch is only for case club members. So basically we got to go outside, stand, stare and then leave. Not super friendly. And for the wine? Now I don’t claim to be ANYTHING close to a wine connoisseur, so I could be totally off-base here, but it wasn’t very good. The whites kind of tasted, to me, like… coughwatercough… in my opinion. Again, in MY OWN PERSONAL opinion. Don’t yell at me in the comments, please. So, overall, not so impressed with Linden. Not super-friendly, not homey, not overly welcoming, and um, you know, they got stuck mid-transition turning the water to wine. We left Linden, again, with the trusty GPS and realized that all that time spent winding down that dirt road was useless, as we drove PAST where we got on it on our way out on the nice paved road. So, note to self, GPS full of crap when not used in a city. If you try and repeat this trip, do it by google maps or mapquest. The GPS just throws you way out of your way. 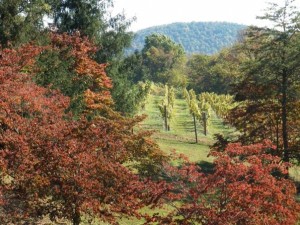 (grapes in the mountains by Jasmine Zick)

Next on our agenda, according to Amanda, was Naked Mountain. Now, there’s a name I can get behind. Naked Mountain! The slogan is “drink naked” – and how can you not love that? They already have cool points over Linden. Naked Mountain was PACKED. The tasting counter was smooshed full of people.  We finally got some counter space after 15 minutes or so. It was three bucks to taste seven wines. Four whites and three reds. We paid, and tasted. I swear the guy who was pouring the wines was twelve. Or at least he looked it. I’m assuming Naked Mountain is family run, and he’s got to be eighteen to serve (right?) so maybe it’s just convenience, but “here’s your 2004 oak barrel chardonnay, with buttery undertones” coming out of a twelve year old’s mouth just isn’t as convincing as it is out of someone legal to drink. Aside from that, it was pretty good.

The Barrel Fermented Chardonnay was nice, the 2004 was my favorite. I also liked the Merlot. (Which can be a sin, apparently.) We decided to settle down and sit outside, a few of us grabbed some wine and some gouda and we headed out to the porch, which overlooks the vineyards. A much friendlier, welcoming place than Linden, Naked Mountain lets you sit for as long as you like, and everything is reasonably priced. The cheese was cheaper than at your local Whole Foods, and just as good quality. The view was relaxing, the sun warm, and it was pretty much the perfect fall afternoon activity. 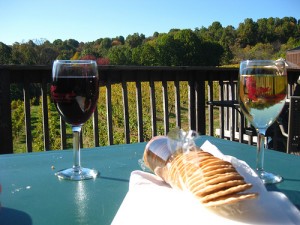 On our way out of town, we decided to stop by the local pumpkin patch. They had a sign along the entrance to 66 and we took a gamble. We wound up at this field on the side of the road next to an orchard. There were tons of pumpkins still on the vine, and lots of good round and juicy ones. We checked out all the good ones, and decided on a tall one for me, and a shorter rounder one for my roommate. They were VERY reasonably priced, at $2 for a 7 pound pumpkin. They also sold smaller pumpkins for baking, and the woman selling them was a true pumpkin aficionado and was able to give strict pumpkin cooking instructions. 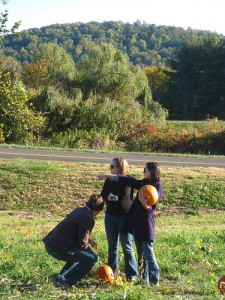 Finding the Perfect Pumpkin by RSchley

All in all, a very very good fall afternoon. Relaxing in the October sun, drinking wine and picking the perfect pumpkins! For more on Virginia Wineries you can click on through VirginiaWine.org – the winery map here is helpful. Next trip out I’m looking forward to going to Three Fox Vineyards (they have a bocce ball court!), as well as the newbie in town, Barrel Oak Winery. Oh, and I want to try Rappahannock Cellars, also. Any suggestions from you, oh faithful reader? What is your favorite Virginia winery?

11 thoughts on “Getaways: Wineries and a Pumpkin Patch down 66”