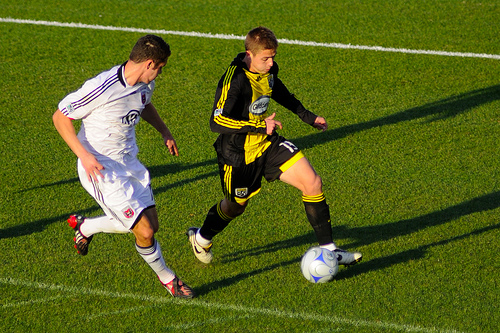 Crew VS DC United by tuxxme

It’s a game of inches, sometimes, and yesterday’s final & decisive match against the Columbus Crew came down to the ruler. Unfortunately for us, the two near misses for United, with both shots hitting the goal posts, lead United to elimination. The last week’s been something of a rollercoaster for the club, as it was looking fairly grim a week ago that they’d even have the chance to make the playoffs under their own steam. However, it all lead up to yesterday’s showdown with the Crew. The loss moves United out of the playoff picture entirely, for the first time since 2002. DC’s winningest franchise is done for the season. It’s not all bad, though, as the return of Santino Quaranta is nothing short of amazing. He’s almost a shoo-in for the Comeback Player of the Year, after his multi-year bout with addiction.

Another victory for the Skins this weekend in Detroit, but it was probably the ugliest I’ve seen. At halftime, they were down to the Lions. The Lions! The Hapless Lions! I’ve got a feeling it takes a special level of emotional resilience to be a Skins fan. At one point, things were getting pretty tense on the sidelines, as Jim Zorn let Clinton Portis have it with both barrels on the sideline as the star running back swooped a towel over his head and ignored the head coach.

It was Santana Moss who got things going for the Skins in the second half, with a pair of TDs. His 50-yard TD reception, burning the Detroit secondary like so many rioters burning houses, got things off on to a good start in the second half. His second TD, an 80 yarder, on a punt return, took the last of the fight from the Lions. Jason Campbell looked solid again, over 300 yards and just five incompletes against Detroit’s last in the universe Defense. They’ll face the Steelers in an election-week grudge-match that will likely have die-hard Skins and Steelers fans rooting for the other guys. The Redskins are one of the best sports/politics indicators. If the Redskins win the week before the election, the incumbent party keeps the White House. If they lose, it goes to the challenger. So, Skins fans, will you be putting your fanaticism before party, or vice versa? 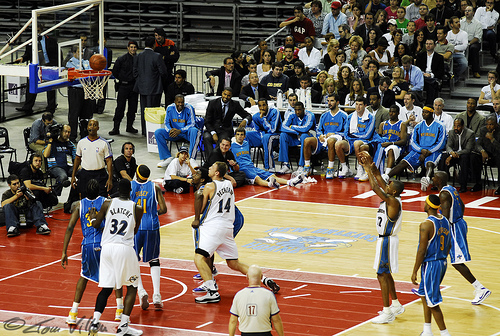 The last kinks have to be out this week, as the regular season opens tomorrow. The Wizards open up their season Wednesday night, and if their win over San Antonio this week was any guide, we may not be totally lost when the season opens. Gilbert Arenas’ rehab is going strong, and we’re hearing he might be back in November, before the season’s too far gone. They open at the Verizon Center on Wednesday night against the Nets. Without Arenas, the power roles fall to Caron Butler, Antawn Jamison and rookie Nick Young. The Wiz need to get their game rolling early, though, to resolve a lot of the questions about their viability without Agent Zero. Good luck, Wiz!

Just like the Redskins, a win is still a win.

During the NHL’s “Super Saturday,” the Caps faced down the Dallas Stars and pulled out an ugly 6-5 OT win, bringing the team’s overall record to 4-3-1 and tied with the division-leading Carolina Hurricanes.

The past week saw a couple of milestones, namely Ovechkin’s first two goals of the season and Federov’s 474th and 475th goals of his career. His first goal on Saturday night pushed him ahead of Alexander Mogilny for the all-time lead among Russian-born players in the NHL.

Biggest surprise so far this season? The Capitals’ points leader isn’t Ovechkin. It’s Alexander Semin, who netted three points against Dallas and now shares the NHL scoring lead with the Penguins’ Evgeni Malkin. Semin has 14 points on the season, with 7 goals and 7 assists.

Coming up this week is the Nashville Predators at home tomorrow, with a short road trip to Buffalo on Saturday and Ottawa next Tuesday.

Well, the rumors of Willie Randolph coming to DC have been explored, and an offer was made to Randolph to be Manny Acta’s bench coach here. Randolph, though, felt it would be better to be unemployed than the bench coach for the team with the worst record in the NL. Well, he’s also up for the Brewers’ managerial job, too, so that could be it. But, well, with the Nats record bad, and unlikely to get a whole lot better next season… Oh well. Back to waiting for Spring Training.

One thought on “Sports Fix: A Plethora”