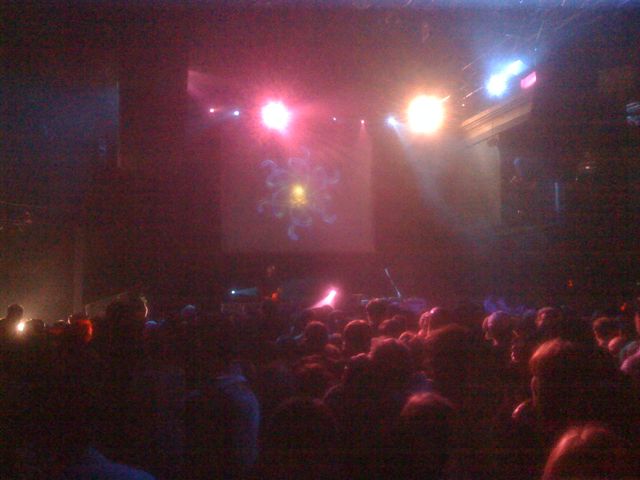 At 1:45, Moby improvised with a fifty gallon drum, and started with some street beats, awaiting for the entire block power outage to be restored. It was later supplemented with an empty beer keg and plastic trash can.. The first ever “Moby – Unplugged”… Quite a feat if your a D.J..

2:25, no updates from Pepco, which according to their outage maps, has affected 750 customers in three D.C. zip codes. We’re expecting the club to cancel the show, but the promised update from club management has not been presented to the rapidly dwindling crowd, stumbling in darkness to retrieve their friends and outerwear from a darkened coat check.

At 2:45, even after the club announced a reschedule, Moby returned to the stage as power was restored only moments earlier… The worn down, albeit less, revelers returned to a wide open dance floor reinvigorated. A truly professional result for all those involved, as the beats went on. The most telling moment of that was the club’s stage manager on his phone in the alley simply exhaling to the driver at the other end..”bring him back”.. and so the night went on to oblivion.

(NOTE: As of this update, it’s still unsure if Moby will be rescheduled for another date, as many left dejected and impatient before the announcement and the power restoration, so hold on to those stubs and check 930.com and Moby.com for an update soon. But braving the cold and the hour of the day, the remaining concertgoers could best be described as hard-core.)