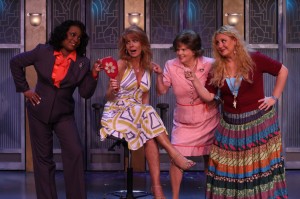 If you were wondering where all the baby boomer ladies were on Wednesday night, the 39-65 female demographic, I found them. They were all enjoying the shameless and entertaining “Menopause the Musical” at Bethesda Theatre, and–to my surprise–I was as well.

Going into the play, I was curious but skeptical, as I noted in my preview piece when the performance opened last week.  Based on descriptions of the play (it changes the words to BeeGees songs to deal with hot flashes?? uhhh..), I expected hokey mom-jokes and a first-wave feminist “embrace your inner woman” sensibility. On those counts, I was absolutely wrong. In fact, after the show, I got to thinking that from a feminist perspective, this play is substantive and important. It frankly discusses issues women discussed only privately over coffee with girlfriends, injecting humor into situations that are sadly unfunny at the time they are happening. While subjects such as birth control, birth in general and abortion have come to the forefront of our cultural consciousness, menopause was something that was still relatively taboo before this show and even now.

The musical itself is set-up around the premise that four women who are very different but representative, start fighting over underwear at Bloomingdale’s Department Store in NYC and soon after become fast friends, bonding over their insomnia and mood swings. From there they go on to sing their menopausal woes everywhere from the restrooms to the cafe to the accessories department. There’s the simple but self-aware Iowa Housewife (Monica Lijewski), the hippie-dippy Earth Mother (Barbara Pinolini), the sassy no-nonsense Professional Woman (Yolanda Williams) and the whiny, pretty but insecure Soap Star (Stacy Schwartz).

The show revved up a bit slowly, mirroring the just-forming relationships between the women. What was immediately apparent though, in a tune that transformed  “Chain of Fools” into “Change Change Change, Change of Life,” was that Yolanda Williams has a set of pipes on her to make your jaw drop.  While the other ladies were talented, Williams went beyond, such that I was waiting for her next number. Mid-show highlights included parodies addressing the less visible side effects of the Change: In “The Great Pretender,” senility; in “Thank You, Doctor,” depression; in “Lookin for Food,” insatiable hunger.

While the audience was kept laughing throughout the performance, there were clear crowd favorites toward the end of the show. “The Work-out Medley,” which comically makes “My Guy” into “My Thighs” (best parody since Whoopie Goldberg’s “My God” in Sister Act), garnered much applause and murmurs of recognition.  But the far-and-away highlight was “Good Vibrations,” in which the friends encourage Iowa Housewife to *ahem* take care of herself, much to my surprise.

Since menopause for me is more than a few years away, there were some awkward moments — think awkward like having your mom’s friends talk about cute boys “tushies” — but not many. I urge my peers: Mother’s Day is coming up, don’t get your mom more earrings or a gift card to Applebees. Buy her tickets and go watch this show. If you’re a lucky son or husband, buy her tickets for her and her friends, because as the show notes, “there’s just no concept for a man.”

3 thoughts on “A Musical for Women, Menopausal or Not”